By Tiptop.News (self meida writer) | 17 days 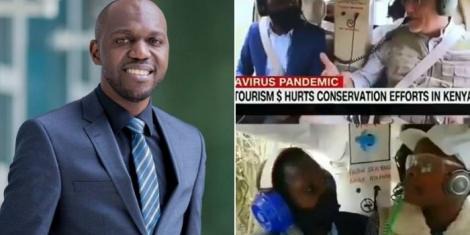 In a world filled with tragic news every day, a group of Nairobi children have achieved national fame by performing comedic re-enactments of news items, TV dramas, and films.

In the three-minute video, the journalist interviewed Kenyan Tourism Cabinet Secretary Najib Balala, who revealed that the country had lost 80 percent of its revenue and that recovery could take until 2024.

The report's production included a chopper ride where the interview took place, as well as cameras capturing wild animals in various states of existence.

The children had to devise ingenious ways to mimic the wildlife movement and appear more realistic during the re-enactment.

In the opening scene, one of the children dressed entirely in black impersonated a hippopotamus. They created a giraffe as well as flamingos using cheap artistic maneuvers.

They flew a toy version of the plane across a surface with a silver manilla paper background, with two boys playing the roles of Madowo and Balala.

The clip, which has received over 12,000 views on Instagram alone, blew the celebrated international journalist's mind.

H-Town Kids first drew Kenyans' attention in 2019 with their recreations of celebrity photos and videos. The group, which began with just one child, has grown to include over 23 children.

Rose Mwaura, the group's manager, stated in a previous interview that the group was formed in 2019 during the August school holidays and has since reached new heights of fame.

Their recreation is so well-known that in 2020, Kenya Film Classification Board (KFCB) boss Ezekiel Mutua presented them with film equipment, including a laptop.

Content created and supplied by: Tiptop.News (via Opera News )