By Willis.com (self media writer) | 26 days ago 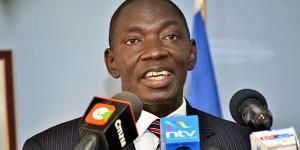 The Kenyan government has explained the high number of Asians entering the country through the Jomo Kenyatta International Airport (JKIA).

Government Spokesperson Cyrus Oguna on Monday, September 27, stated that the new visitors were international tourists, ending speculation that the country had taken in asylum seekers from Afghans fleeing the Taliban.

Oguna added that the individuals who have arrived in Kenya in the past few weeks have legal documents, showing that they are in the country on holiday.

“They are tourists in the country legally and some prefer travelling and staying as families,” Oguna noted.

The government has clarified this after videos of Asians landing in the country went viral, causing so much uproar on social media platforms, most of them questioning their mission.

Many of them were picked by the City Hoppa and City Shuttle buses, which take them to different destinations in Nairobi and Machakos counties.

A section of Kenyans speculated that the Asians were on transit to Saudi Arabia, and had been put on quarantine in Kenyan facilities.

This speculation emanated from the fact that Saudi Arabia has put Asian countries on the red list, and they have to go through a country that is exempted.

Some of them, who are supposedly casual labourers, were once stuck in Machakos and Nairobi after they were hit with the expensive hotel bills in Kenya.

When confronted on the issue, Oguna insisted that all the visitors would be put in quarantine in designated places, and won’t be seen roaming around again.

This move to host Asians comes barely two months after the Ugandan government agreed to host 2,000 refugees from Afghanistan, after the agreement they had with the US government.

At the time, Oguna indicated that Kenya had not received a request from the US to host Afghans, but when contacted, they would consider the proposal.