By Girlo (self media writer) | 2 months ago Kenya Airways, the country's flag carrier, claims that there is no State capture and that all of its contracts are legal.

The following is in response to statements made by Deputy President Rigathi Gachagua on Sunday during an interview on Citizen TV.

DP Gachagua asserted during the interview that KQ's string of losses was caused by poor contracts that they had reportedly engaged into to benefit a select few people in a practice he referred to as "State capture."

"We've talked with Kenya Airways, and while their planes are constantly full and they charge the highest tickets on the continent, they still lose money. We are attempting to address that State capture in order to reduce the cost of the airline's operations so they can turn a profit, the man said. 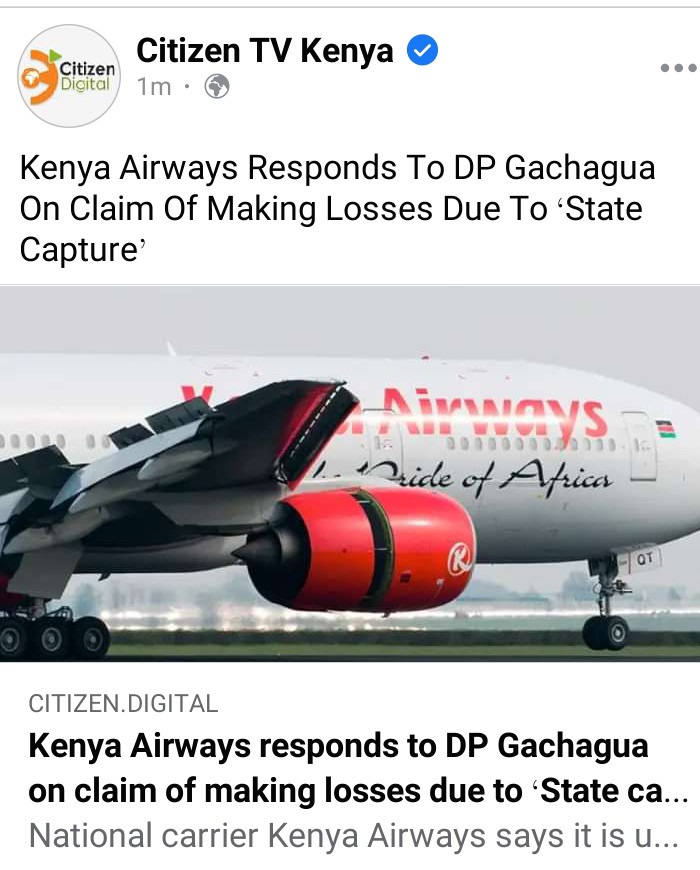 KQ has refuted the allegations, claiming that the contracts are solely commercial business agreements intended to benefit the airline, through its Chairman Michael Joseph.

Joseph lists the number of planes that KQ operates under two separate models in his statement. These include operating leases, when the lessor and lessee agree to a plan for a specific amount of time in exchange for regular payments, and long-term leases with the option to acquire the aircraft at the conclusion of the arrangement.

Assertions that they were paying above market rate prices for services provided to the airline were also rejected by Joseph, who claimed that the charges were within the range of going market rates at the time the deals were being negotiated.

In order to lower the overall expenses of aircraft leasing rents, he added that the KQ Board and Management have been interacting with the lessors.

Regarding the airline's ownership, Joseph stated that KQ is a publicly traded company with the Kenyan government holding the majority of the shares.

As all the tactics they employed to turn around the airline are beginning to pay off, Joseph expressed confidence that KQ will reverse its fortunes by 2024.

Content created and supplied by: Girlo (via Opera News )

Has Ruto Fell Out with Wetangula?" New Reports Emerges after UDA Lost to Ford Kenya in Bungoma Race

How To Develop Money Discipline And Save A lot

Sen. Khalwale is a Happy Man Despite His UDA Candidate Losing to Ford-Kenya in Bungoma Senate Race