Solar panels configuration & mppt in both parallel vs series.

By Clemarks (self media writer) | 1 month ago

There are environment factors that come into play when deciding how to configure solar panels for a charge controller. But no matter what you have to figure in the total wattage of the solar array first so that you do not exceed the output current of the charge controller.

You need to be more careful or conversant on how to configure the array for the charge controller so you do not blow it up. So there is no such thing as 12 volts, 24 volts, 36 volts or 48 volts solar panels. This are merely classifications. What you need to pay more attention is to the total ore voc and imp. This is when the voc and imp come into play. Again there is need to configure the panels so you do not exceed the input voltage of the charge controller.

Before buying a charge controller there are two numbers that are most important and that is the input voltage and the output current that will usually be denoted directly in the name. When buying a victron charge controller it will be written the name right on the front of the case. Like victron smartsolar mppt 100/50 charge controller. This means it can handle 100 volts input and 50 amps output from the controller. 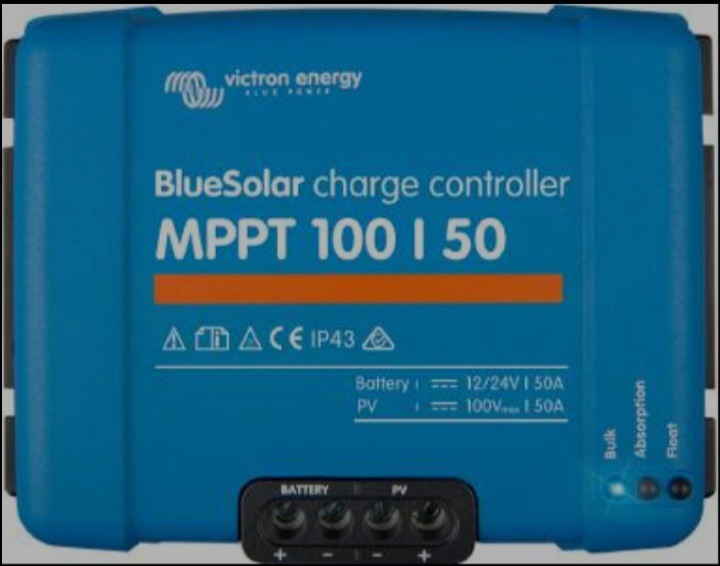 The environment factors that come into play when deciding how to configure your solar array are simple. If you will not have to worry about shade on the panels then you can configure your panels in series. This produces higher voltage which will get your batteries charging earlier in the day and later in the evening providing that series string does not exceed the input voltage of the charge controller.

If you will have shade sometimes but other times no shade, then you might configure the panels in both series and parallel. This will give you some protection from the shade but also keeping the voltage up as high as possible charging earlier in the day and later in the evening. However it will not start as early or last as long as a full series configuration.

In series configuration we will use the four 100 watts panels with a voc of 21.7 and an imp of 5.79 amps. If you put those four panels in series it adds the voltage. 21.7 volts × 4 panels = 86.8 volts. This means the input voltage is 86.8 volts and will not exceed the input voltage of the victron 100/50 charge controller. This configuration produces 86.8 volts at 5.79 amps. Series connection is good for adding voltage.

Side note mc4 branch connects can only handle 30 amps of current so if you could melt your mc4 connectors or melt wire. Again higher current means you cannot do as long of a run of 10 gauge pv wire without stepping up to a heavier gauge wire.

You can also connect the four panels in series and parallel configuration and this will be the results. You have four 100 watts panels with a voc of 21.7 and an imp of 5.79 amps. By putting two in series produces 43.4 volts then, putting each series in parallel keeps that total 43.4 volts the same and adds the 5.79 amps of each series for 11.58 amps. This is the best of both worlds fit you will have both times with shade and without. You cannot do a series or parallel configuration with an odd number of panels. So it has to be an even number of panels.

Didmus Barasa Detained, To Spend Weekend At The Police Station After Surrendering.

Kidero Rejects Wanga's Win In Homabay, Calls Supporters To Be Patient And Wait For Next Action

"I Will Not Accept" Gubernatorial Aspirant Kidero Refuses To Concede Defeat, Vows to go To Court