How to wire solar panels and batteries in series-parallel connection and combo for 24V system.

By Clemarks (self meida writer) | 6 days

Such current is same in each branch

voltage will add up in parallel connection. Suppose we have 12 volts pv panels and batteries.

Similarly, Ah capacity of batteries in series would have.

Voltage remains the same for both pv panels and batteries.

Now lets look at both pv panels and batteries in series to parallel combination connection.The next part is interesting where we will utilize the maximum efficiency of 12V solar panels and batteries by arranging them in series to parallel combination to increase both the charging power from solar panels and storage capacity of batteries. This way, the more power will charge the battery quickly with extra power storage. We can use this system in tiny projects like 6 volts batteries and pv panels for 12V system or residential applications like 24V or 48V and so on.

Suppose we have the following rated devices.

Voltage and current in series parallel connection of combination of batteries would have the same impact as mentioned above for solar panels, example the batteries bank voltage would increase from 12V to 24V and storage capacity from 100Ah to 200Ah. 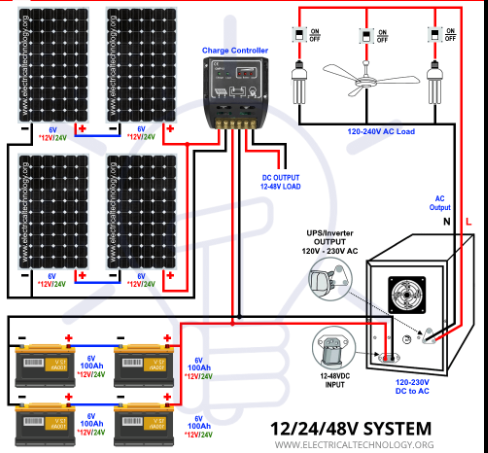 The following simple wiring image shows that four 12V solar panels and 12V, 100Ah batteries are connected in series to parallel combination. Pv panels are connected to the batteries and direct current load through a charge controller. The 120V or 230V alternate current load is connected through inverter. The load can be powered up during normal sunshine or day time and operate via backup power stored in the batteries during shading or night. This whole 24V system will work automatically as we have used the uninterruptible power supply ups inverter such as we have used automatic ups wiring. It means no need to use additional auto or manual changeover or auto transfer switch for automatic operation. 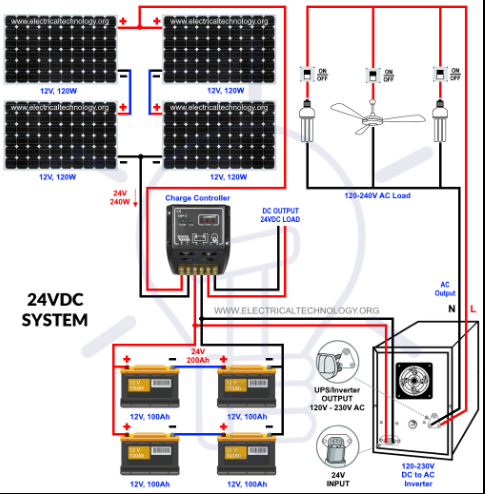 ● Series connection of batteries or solar panels will increase the level of voltage, example two 12V, 5A pv panel or 12V, 100A battery in series will provide 24V. Where current is the same in both devices such as 5A in panels and 100Ah in batteries.