By IanbMurray (self meida writer) | 7 days

The FIFA games are one of the sweetest pleasures you'll enjoy on planet earth. Just invite all the FIFA fanatics from all over the world. Since the introduction of the first introduction of FIFA in 1993, we as FIFA fans have come a long way to where we are today in 2021. FIFA 22 is on the way the eagerness is oozing from FIFA lovers. Over the years numerous players have managed to be inducted into one of the best games of all time. The highest rating since 2014 has been 94. Only Ronaldo and Messi have attained this feat. Here are Top 10 players to have been featured in the last 10 FIFA.

Attacking Intelligence was introduced in FIFA 13. Barcelona was on fire and this meant the inclusion of Messi, Iniesta, and Xavi when they were at the peak of their powers. At Real, Madrid Christiano was flying at La Liga. Other players included in the list are Ribery, Vidic, Rooney, Casillas, David Silva, and Radamel Falcao. 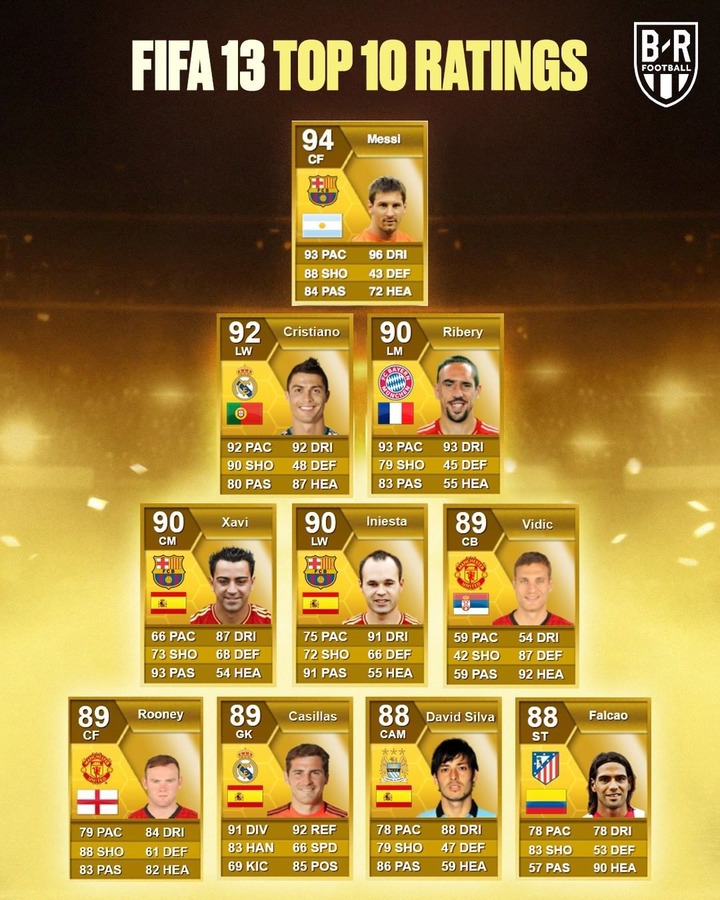 'Off the ball' gameplay was introduced. This concurrently moves two players into the box to anticipate a pass. Robert was annihilating defenders in the Bundesliga. Falcao and Monaco were trying to take over Ligue 1 as Ibrahimovic was an undisputed force they were fighting against. Other players in the list include Messi, Ronaldo, Van Persie, Iniesta, Xavi, Aguero, and Arjen Robben. 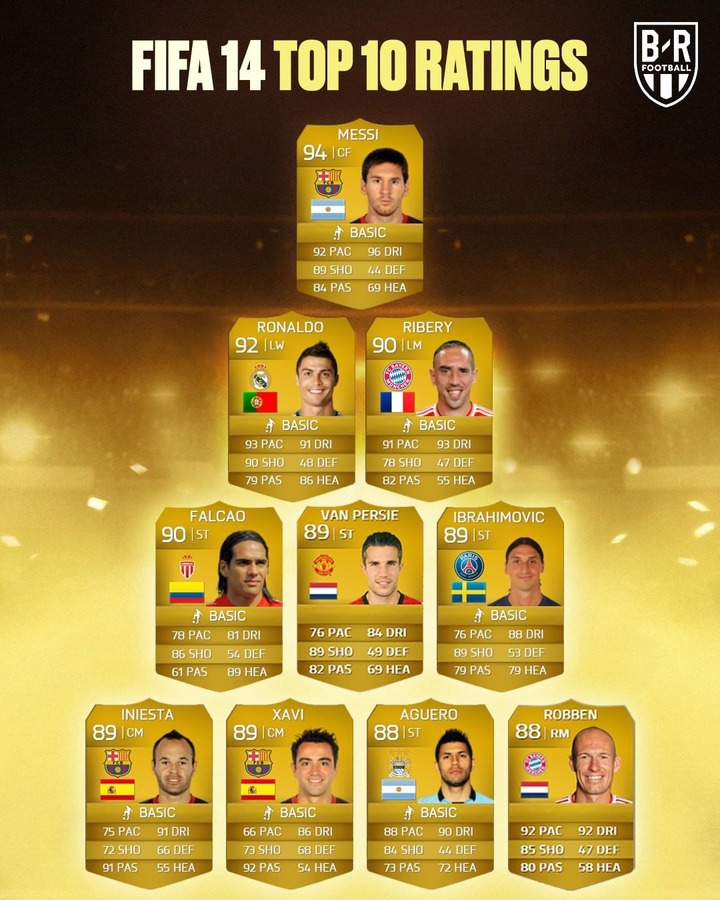 FIFA 15 was the first time the Premier League was inducted together with their 20 stadiums. Premier League graphics were also introduced to the game. Suarez and Messi were getting well acquitted at Barcelona. Manuel Neuer in Munich was proving why he was one of the best goalkeepers in the world. Eden Hazard, Van Persie, and Falcao were making the EPL proud. Ronaldo, Ibrahimovic, Robben, and Iniesta were also in the top 10 rankings. 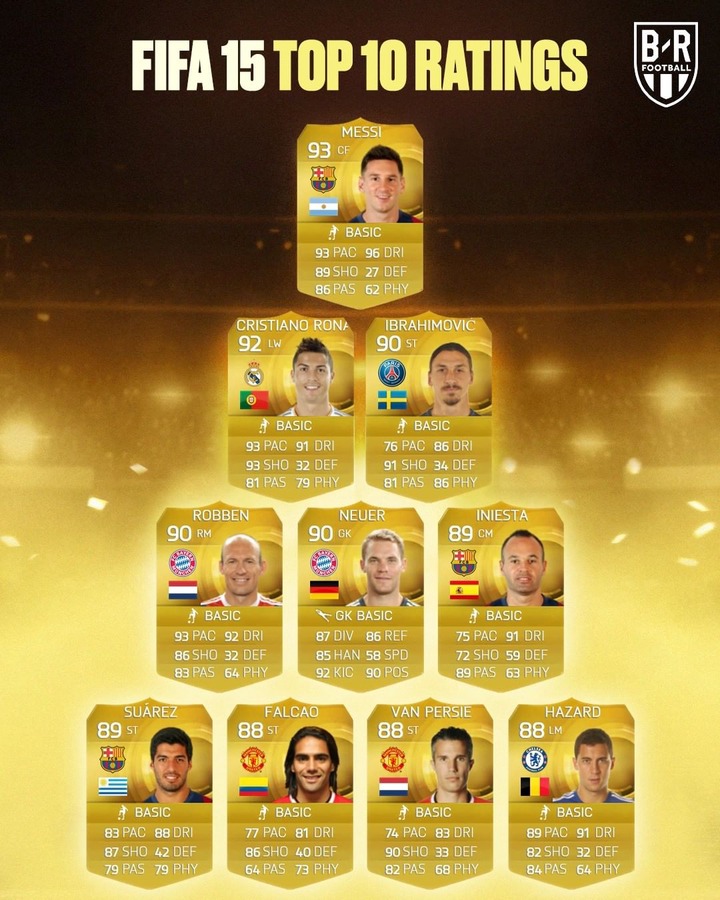 Women and national teams were first featured in Ea Sports FIFA in FIFA 16. This was just to indicate how gender equity was an important issue in our current social circles. The MSN was wreaking havoc all over Europe. Then Arjen Robben was still making a fool of Arsenal at the Champions League. David Silva was coming up with a masterpiece at Man City. Ronaldo, Ibrahimovic, Manuel Neuer, Eden Hazard, and Iniesta were also in the spotlight of the top FIFA rankings. 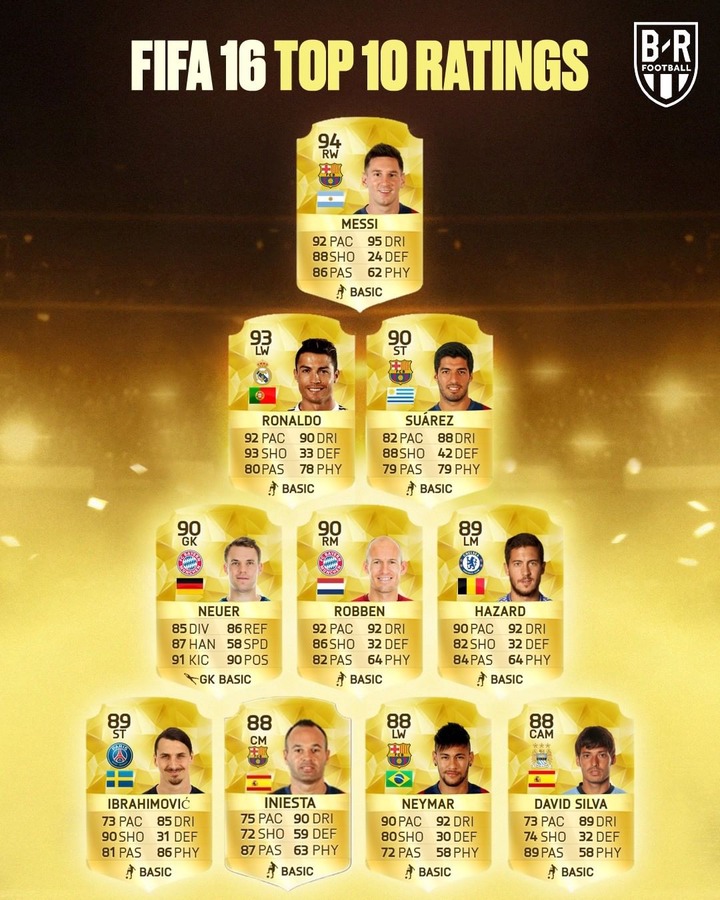 The story mode was introduced capturing the heart of many fans. The journey brought to us the fan-favorite, Alex Hunter. Ronaldo had taken back his throne by winning the first international trophy with Portugal. Lewandoski had sprouted into a lethal goal-scoring machine, De Gea was proving why Sir Alex Ferguson had single-handedly picked him to be the replacement of Edwin Van Der Sar. Boateng was the newest defender on the list. Ibrahimovic was ruling over the French League. Messi, Neymar, Suarez, Neuer, and Bale were also on the list. 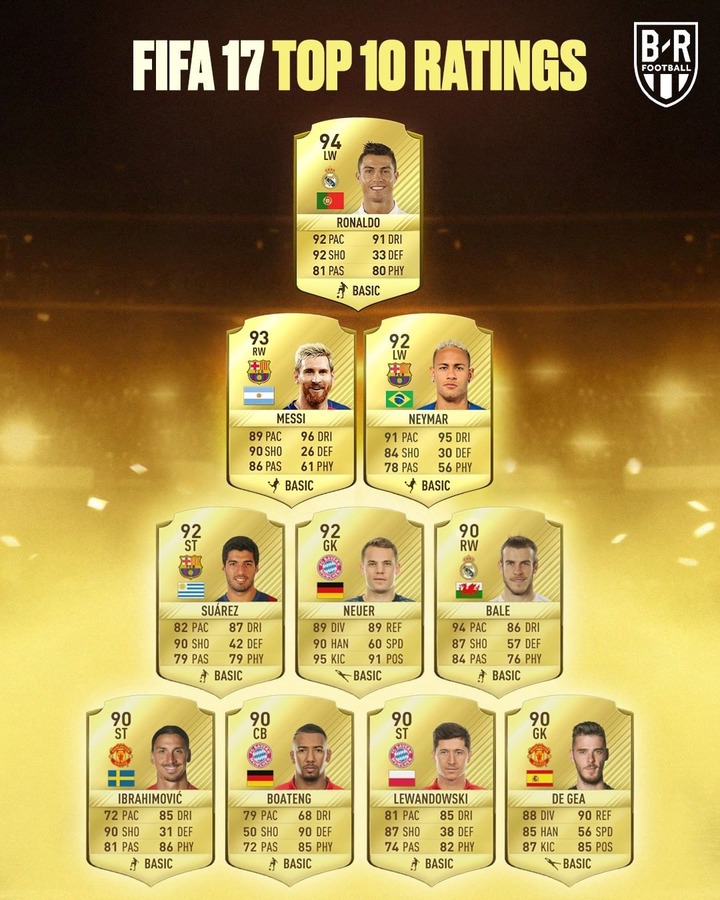 Ultimate teams were first featured in FIFA 18. Four new skills had been introduced with the famous Cruyff turn leading the way. Neymar's bizarre transfer was still fresh in FIFA lovers. Real Madrid had lost Ronaldo to Juventus after winning 3 consecutive Champions Leagues. This saw Kroos and Ramos added to the Elite group. Higuain, Messi, Suarez, Lewandoski, Neuer, and Hazard had all had stellar seasons with their respective clubs. 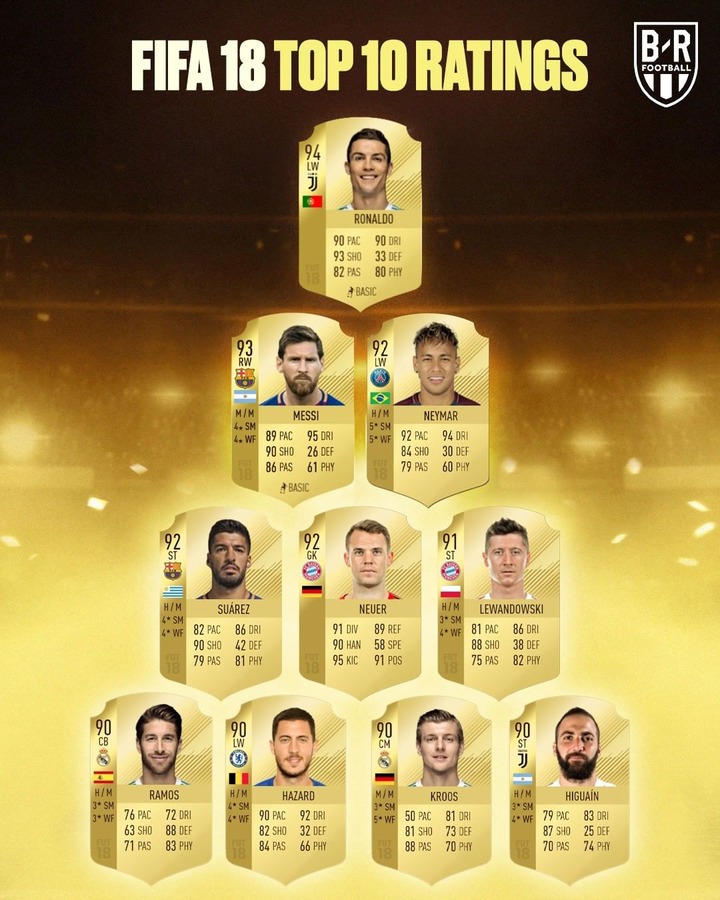 FIFA finally inducts Champions League, Europa League Super League Competition into the game. The commentary section gets a minor shakeup. At the top of the pile, the two G.A.T.S were reigning supreme. Kevin De Bruyne was obliterating the Premier League with susceptible passes and goals. Neymar, Hazard, Sergio Ramos, Suarez, De Gea, and Kroos had made the top 10 FIFA 19 ratings. 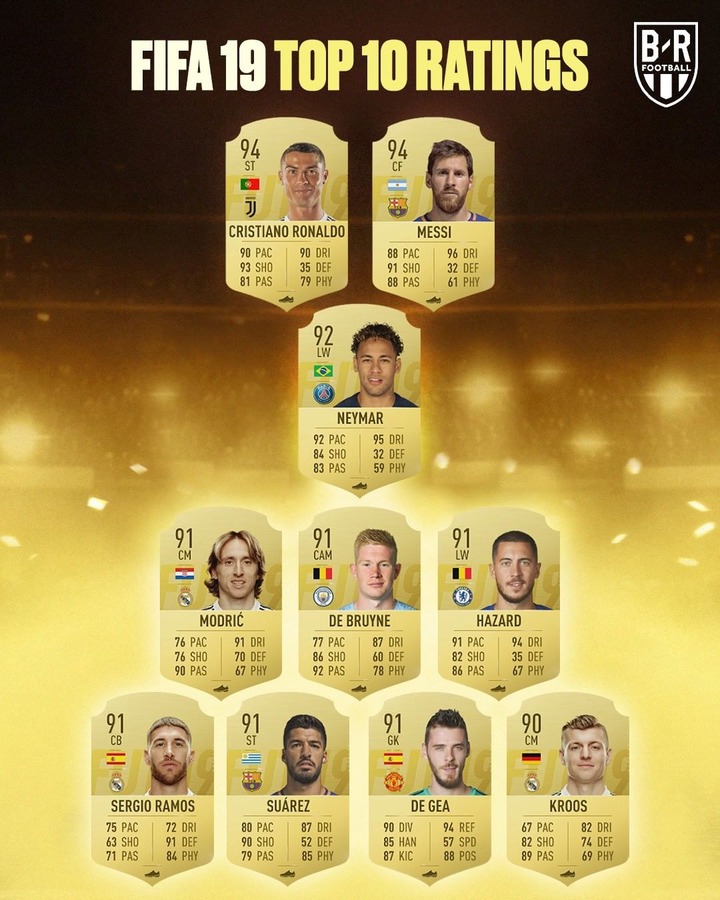 FIFA 20 saw the introduction of Volta mode. Eden Hazard and Virgil Vin Djik were the new faces on the cover photo of the FIFA game. Zidane was the newly introduced icon. Messi had withdrawn Ronaldo at the top of the rankings. Oblak and Ter Stegen were the new goalkeepers in town. Liverpool dominant season brought to us both Mo Salah. Neymar, Hazard, De Bruyne, and Modric were on the list. 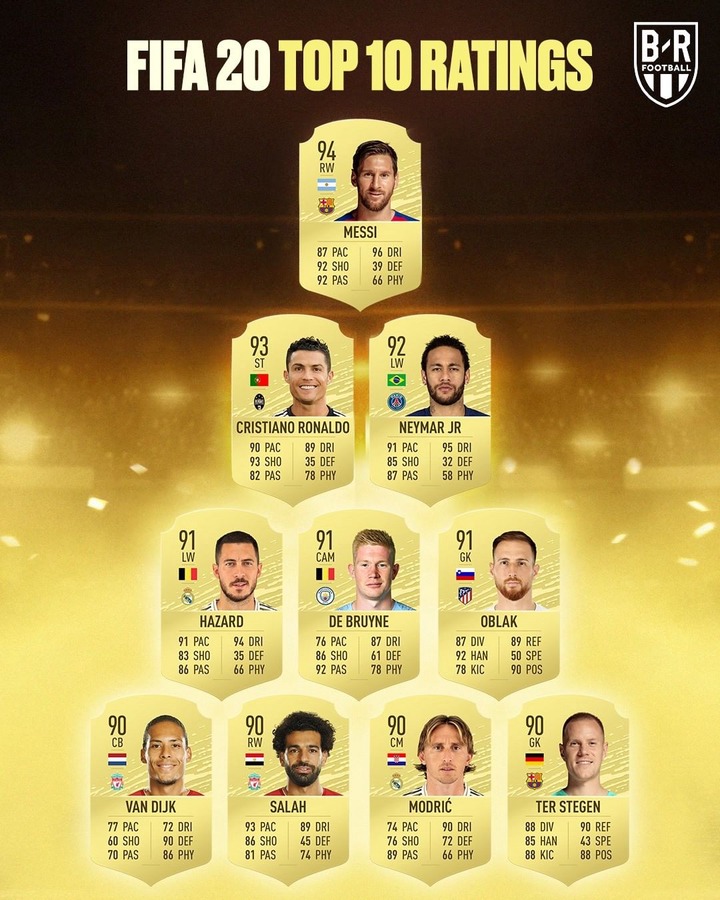 Covid 19 was causing delays in the launching of the game that eventually dropped in October 2020. Kylian Mbappe to take over his idol, Christiano as he ascended to the throne on all 3 covers. David Beckham was the new additional icon. Quick sim was an added feature in career mode. Mbappe had joined his forefathers. Liverpool had Salah, Mane, and Vin Djik featured on the list. Messi, Ronaldo, Lewandoski, De Bruyne, Neymar Jr, and Oblak were also present in the lineup. 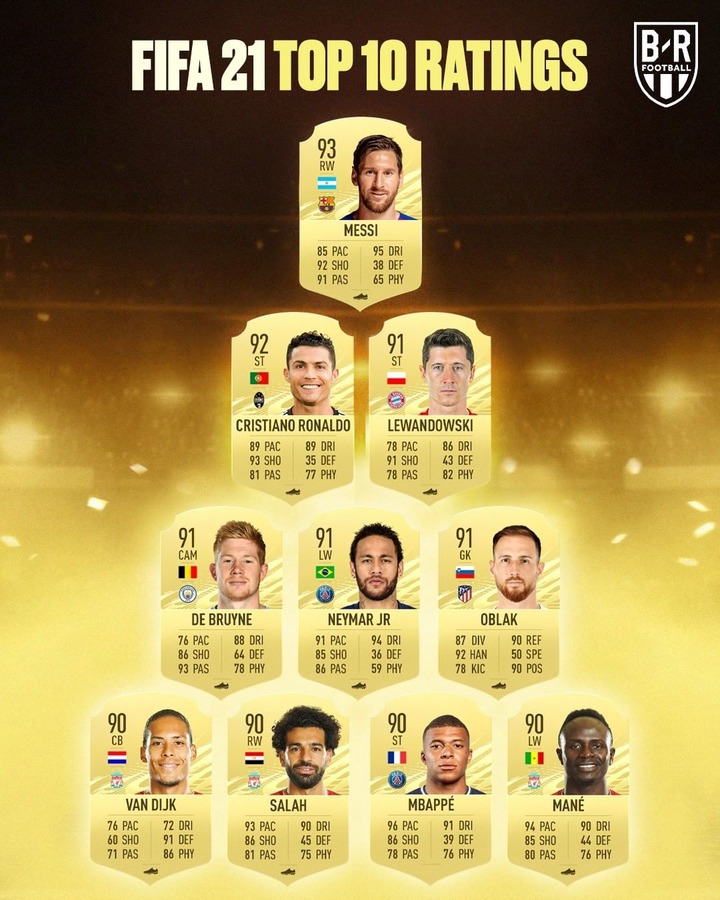 Messi still reigns supreme in this jungle. Lewandoski has surpassed Ronaldo. Manuel Neuer is back at the table of the elite. Neymar and Mbappe share the same rating. De Bruyne, Kante, and Kane proudly represent the EPL. Oblak and Neuer are heading the charge against other goalkeepers. 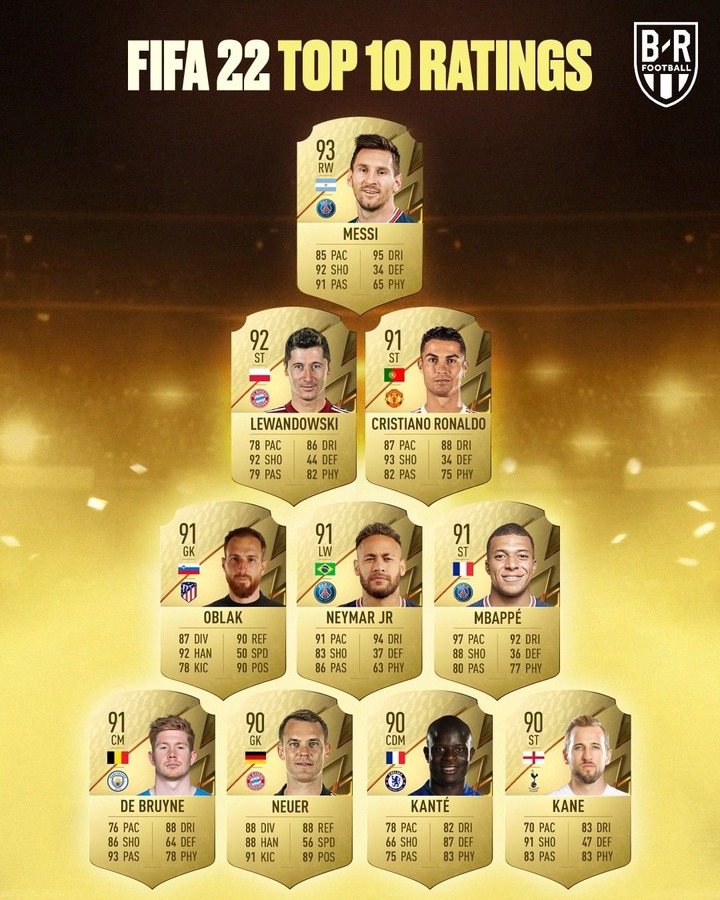 Which was your memorable FIFA? Which player was the most fun to torture your friends with during a match? Leave your answers in the comment section below. Like, share and subscribe to the channel.