By Don_Tech (self media writer) | 4 months ago 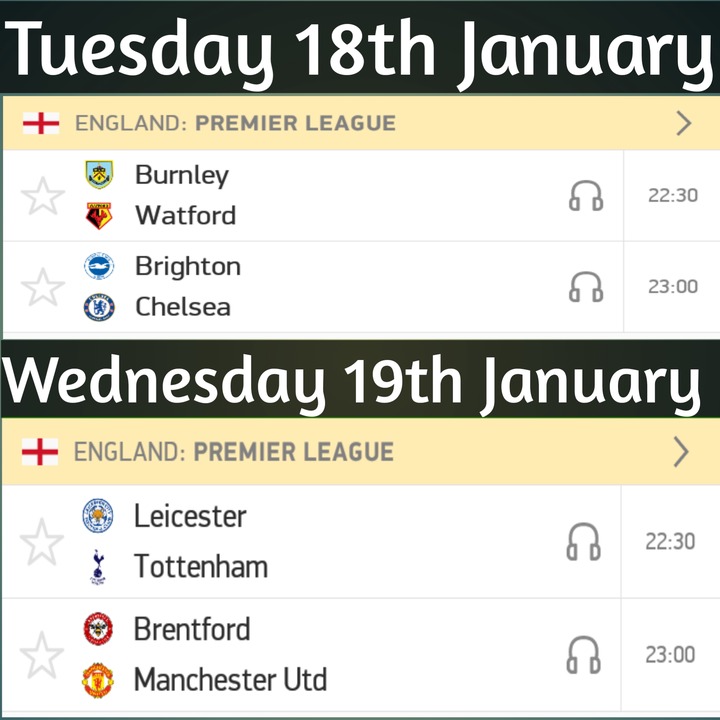 This game is fixed to be played on Tuesday 18th from 2230 EAT at Turf Moor Stadium. In the past 5 matches in all competition both teams have recorded 1D and 4L. On their 5 previous head to head meetings Brighton have won 3 times while watford have won just once.

Stake: Burnley to win or Total Score under 3.5

Stake: Total Score under 1.5 or Chelsea to win.

Stake: Total Score under 1.5 or Tottenham to win

This game is fixed to be played on wednesday 19th from 2300 EAT at Brentford Community Stadium. In the past 5 matches in all competition Brentford have recorded 2W and 3L while Manchester United have recorded 2W, 2D and 1L. On their previous head to head meetings both team have had a draw.

Today's Jackpot Prediction That Will Earn You Big Bonus

5 Ways To Improve Productivity Throughout Your Day.

Sunday's 9 Best Matches to place with a little stake.

Win If You Place On These Nine games

15 Pictures That Reveal The Ugly Truth About Online Shopping