Chelsea and Liverpool are set to Battle out in the transfer Market for the services of 20 year old Jude Bellingham. The midfield metronome has been on the radar of many clubs in the past couple of seasons but Borussia Dortmund have always repelled lucrative offers tabled by interested club. According to Borussia Dortmund’s CEO, Watzke, the player is untouchable and a generational asset of the club.

In a recent interview, Jude Bellingham was passively asked which position he thought he thrives more in. “I would say at #6 role. Being the first player to receive the ball from the defense makes me the hinge between attack and defense. I can also play in the #8 role but the few times I’ve played in that role have not been convincing. I know I still have a lot to learn in that regard.” 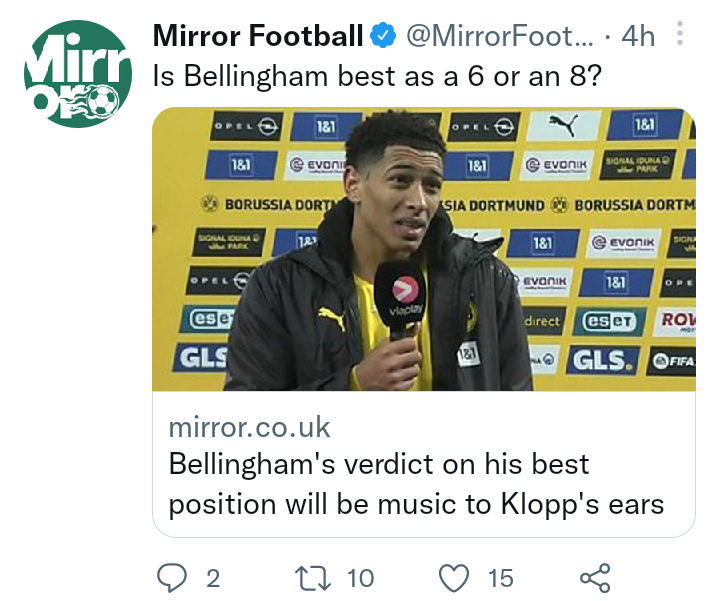 Screenshot: Jude Bellingham has revealed that he plays more proficiently as a #6

This is good news to Chelsea than to Liverpool because the Blues have been planning on transitioning from Ngolo Kante. The Frenchman is not getting any younger and his frequent injury spells have crippled the team’s progress in more ways than one. Replacing him with a younger and more vibrant version of him seems to be a good idea for Graham Potter at the club. It is understood that Potter is very much interested in pursuing Bellingham in upcoming transfer windows. Jorginho should start packing his bags…

Bellingham’s arrival could pose a direct threat to Italian maestro Jorginho. The 27 year old has also been out of his depth since the start of the new season, with his presence in the first eleven most often proving inconsequential to the general team performance. As a matter of fact, Chelsea fans think that it is about time that the club should shortlist the midfielder in the transfer list. Jorginho has a lot to prove if he is to retain his place in the starting eleven. (Image: Courtesy of Google)

Jorginho is a talented midfielder but I have a feeling that Graham Potter will be using less of him this season. Potter can either drop Jorginho from the starting eleven or encourage him to play in more advanced role as a box-to-box midfielder. Dennis Zakaria might take over before Bellingham joins the club, but only if Jorginho fails to leave a lasting impression on the manager.

Former Chelsea playmaker has announced his retirement from International football at age of 31.