Bruno Fernandes - The story of a star. 'Don't be left out'

By HumphreyControversial (self media writer) | 7 months ago

Bruno Miguel Borges Fernandes was born in Portugal on the 8th of September 1994. His journey to success has not been the easiest having been unable to be successful in trials at clubs in his home country of Portugal. After failing to secure a place in Portuguese outfits like Boavista, Fernandes was inducted into the youth team of Novara where he developed and joined the senior team. 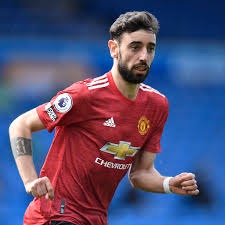 During his debut season at Novara, Fernandes was so instrumental that he caught the attention of big clubs at the time particularly Udinese. Eventually, Udinese managed to secure the services of the star midfielder at 2.5 million euros in the summer of 2013. He made his debut in the Serie A and managed to 4 goals that campaign. After 3 seasons, Fernandes left Udinese for Sampdoria.

He came into the limelight when he secured a return to his homeland of Portugal to Sporting CP on the summer of 2017. The move triggered the star in Fernandes who managed 31 goals in his two seasons at the Portuguese giant club. This performances enabled Bruno to receive a call up to his national team of Portugal where he made his debut in 2017.

Also, football giants Madrid, Tottenham Hotspur and Manchester United were interested in the midfielder. Manchester United won the battle and signed the midfielder for 49.5 million euros in January, 2020. Ever since the midfielder has become a star in the premier League competing established playmakers like Kevin de Bruyne. According to Man United gaffer Ole Gunnar Solskjaer, we are yet to see the best from Fernandes since he is a born star.

Content created and supplied by: HumphreyControversial (via Opera News )