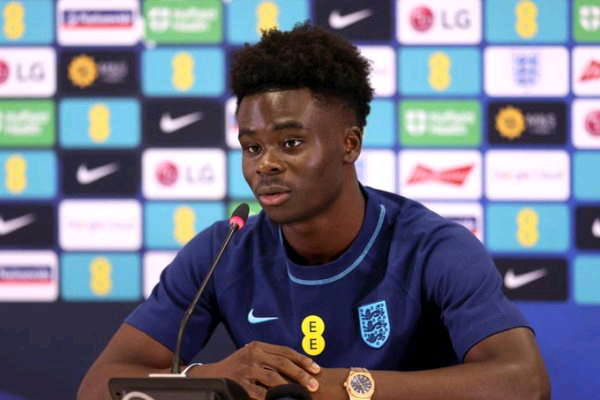 Gabriel Jesus, who many Arsenal fans will consider the season's best signing, joined the club from Manchester City last summer. However, according to reports from the world cup, the signing could miss three months of action due to injury, which would be bad news for Bukayo Saka and the Arsenal team.

The news of Gabriel Jesus' injury at the current FIFA World Cup 2022 has devastated forward Bukayo Saka, who plays for both England and Arsenal.

Saka, who scored a goal in England's 3-0 victory over Senegal on Sunday, made this statement prior to the Three Lions' World Cup quarterfinal match against France on Saturday.Saka and Jesus are both teammates at Premier League club Arsenal.

Jesus, who has been eliminated from the World Cup because of a knee injury, was brought up when the 21-year-old was questioned.

Regarding Gabriel Jesus' injury, Saka said, "He is a very, very, very important player for us [Arsenal] and it is not good to hear the news."

"Obviously, I've messaged him, and I believe he'll visit the doctor and determine what needs to be done for the following steps."When I heard it, it was clearly bad news."

Arsenal's Gabriel Jesus and Bukayo Saka have been key players this season, giving the Gunners a chance to compete against Manchester City and finish first in the Premier League.

With their Brazilian player injured, Arsenal's season may be shaped or impacted, and Manchester City may even rule the Premier League season as a result.