As we mourn the late Agnes Tirop during her funeral ceremony at Attending funeral service of the late athlete Agnes Tirop at Kapnyamisa village, Mosoriot, Nandi County today on the Saturday of October 23rd, Kenyan athletes held a special session to bid their beloved friend and colleague the last goodbye. its also coinsident that today she was to celebrate her 26th birthday.

The athletes that could be seen with sad faces took a moment to pay their tribute to the slain champion with a song and a showers of flowers as they wished her soul eternal rest.

They first converged around the coffin in which her body rested to show that "we are in this together" and asked the deejay to play two songs as they paid their tribute.

The first song to be played was Evangelist Elizabeth Nyambura's "Ni Salama Rohoni" while the second one was "Pamoja Na Wewe" and as they sang along, they opened a box of flowers and showered the whole place as captured in the photos below.as captured below.

as captured in the photo below. 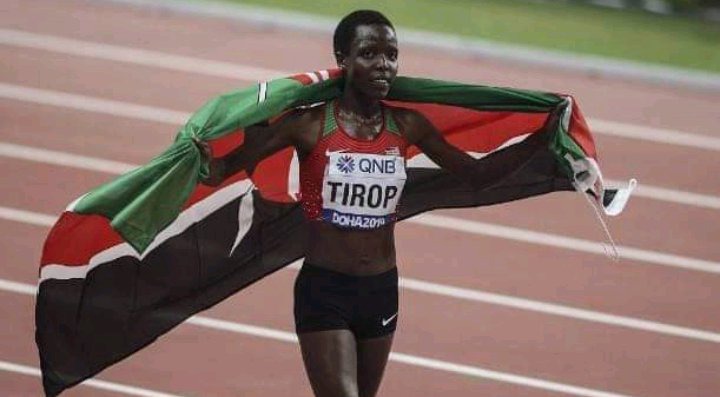 The late Agnes Tirop was murdered last week by her husband in Iten town of Elgeyo Marakwet county and was to celebrate her birthday today.

Among the dignitaries attending her funeral ceremony is the

Condolence letter was also recieved from politician who could not attend, Dp Ruto's letter of tribute to the family was read.Rest in peace Agnes chebet Tirop.