By DjVincey (self media writer) | 8 months ago 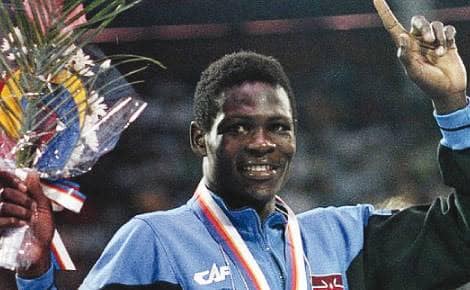 Robert Napunyi Wangila ( born on September 3, 1966, in Busia County) was a Kenyan boxer who won a gold medal in the welterweight division at the 1988 Summer Olympics.

Wangila was only 20 years old when he won Kenya’s first and only, to this day, non-track Olympic gold medal in 1988.

Robert Napunyi In 1994, June faced an opponent called David Gonzales at the Aladdin Hotel in Nevada Las Vegas. Gonzales was a hard pounder too, focusing on the arms, chest, and head.

Wangila had been battered so badly that the match was called off in favor of Gonzales by referee Joe Cortez. When the fight was awarded to Gonzales, Wangila protested. He was okay for the first 45 minutes after the match but then he collapsed and fell into a coma.

He married a Muslim Wife in May 1992 and was buried according to the Muslims.