Allegri is Real Madrid's chosen one to replace Zidane

The 53-year old has remained Real Madrid's first choice ever since the possibility of Zidane leaving was considered. That said, the club wanted to be fully respectful to the Frenchman until the very last moment and did not make any formal contact until their man had made his own decision to depart. Allegri's attitude, in this regard, has been exemplary, choosing to hold off securing his next employer until the right option formally opened up. 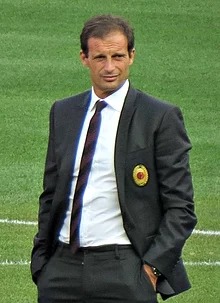 Allegri started his managerial career in 2004, serving as the manager of Serie C2 team Aglianese, the club where he spent his two final years as a player. Following an impressive season with them, Allegri was called to head Grosseto, then in Serie C1, but his experience with the biancazzurri proved not to be as successful as with Aglianese and he was ultimately sacked shortly after the beginning of the 2006–07 Serie C1 season. Shortly after being sacked by Grosseto, Allegri agreed to rejoin his mentor Giovanni Galeone at Udinese, becoming part of his coaching staff.However, this practice proved to be forbidden by the Italian football laws because he was still contracted with the Tuscan club, which caused Allegri to be disqualified for three months in early 2008.

On 29 May 2008, Allegri was announced as new head coach of Cagliari in the Serie A, replacing Davide Ballardini.Despite a disappointing start, with five losses in the first five league matches, Allegri was confirmed by club chairman Massimo Cellino and later went on to bring his team up to a mid-table placement in December.On 9 December, following a 1–0 home win to Palermo, Cagliari announced they had agreed a two-year contract extension with Allegri, with a new contract that was set to expire on 1 June 2011. The contract was then revealed to have been signed in October, in the midst of the rossoblu's early crisis.

He completed the 2008–09 season in an impressive ninth place, their best result in Serie A in almost fifteen years, which was hailed as a huge result in light of the limited resources, the lack of top-class players, and the high quality of Cagliari's attacking football style, which led the Sardinians not far from UEFA Europa League qualification. Such results led him to be awarded the Panchina d'Oro (Golden bench), a prize awarded to the best Serie A football manager according to other managers' votes, ahead of Serie A winning coach José Mourinho.In the 2009–10 season, he managed to confirm Cagliari's high footballing levels despite the loss of regular striker Robert Acquafresca, leading an impressive number of three players from his side—namely Davide Biondini, Federico Marchetti, and Andrea Cossu—to receive Italian national team call-ups during his reign at the club.

On 13 April 2010, Cagliari surprisingly removed Allegri from his managerial duties despite a solid 12th place with 40 points, and youth coach Giorgio Melis—with Gianluca Festa as his assistant—was appointed as his replacement. 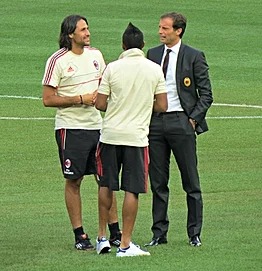 Allegri with Mario Yepes and Robinho in 2012

Allegri was released from his contract by Cagliari on 17 June 2010, under request of Serie A giants Milan, who were interested in appointing him as their new manager. On 25 June, Allegri was officially appointed as the new manager of Milan. In his first season in charge, Allegri led Milan to their first championship title since 2004, beating title incumbents and cross-city rivals Inter Milan in both league fixtures; at the time, only Roberto Mancini had achieved that feat at a younger age.Allegri's Milan side, however, failed to make it past the semi-finals of the Coppa Italia, losing to Palermo 4–3 on aggregate. The team also qualified for the knockout stage of the UEFA Champions League, where they were eliminated by Tottenham Hotspur.

Success continued in his second season at the club. He led Milan to their sixth Supercoppa Italiana title on 6 August 2011, by coming from behind in a 2–1 win over city rivals Inter in a game played at the Beijing National Stadium. That was as far as his success went for that season, however. A semi-final Coppa Italia knockout at the hands of Juventus followed by a quarter-final UEFA Champions League knockout at the hands of Barcelona left Milan fighting on only one front towards the end of the season—the Scudetto. Even that was to be lost, however, with the Rossoneri finishing in second place to Juventus and therefore qualifying for next season's Champions League group stage. The season was also marked with controversy however, as in the second half of the season, Milan had a goal by Sulley Muntari disallowed in a key match against title rivals Juventus at the San Siro, after they had already been leading 1–0; the match eventually ended in a 1–1 draw. Along with Adriano Galliani, Allegri drew criticism for his decision to sell veteran deep-lying playmaker Andrea Pirlo to Juventus, after excluding him from the starting eleven the previous season, and deeming him to be a surplus due to his age; Pirlo went on to play a key role in Juventus's victorious Serie A title.

On 13 January 2012, Allegri agreed to extend his contract with Milan to the end of 2013–14 season. On 5 June 2012, Allegri stated that he intends to coach for only 10 more years and plans to retire at the age of 55 due to the fact that coaching contains a high level of stress and anxiety. He also said that he hopes to coach the Italian national side before he retires. With the departure and retirement of several of the club's key players, Milan struggled at the beginning of the 2012–13 season, and had only collected 8 points from their first 7 games, putting Allegri in danger of getting fired early on. Despite all the criticism from the critics, Milan stuck with Allegri and he managed to get the best out of some younger players including Stephan El Shaarawy, Milan's home-grown player Mattia De Sciglio and later on Mario Balotelli. Allegri managed to steer the Rossoneri from 16th place to a 3rd-place finish at the end of the season, with an epic 2–1 comeback victory away to Siena. The result gave Milan a spot in the playoff round for the 2013–14 Champions League campaign.

On 1 June 2013, club president Silvio Berlusconi confirmed Allegri to remain as the manager of Milan, despite numerous speculations that he would be given the sack. On 31 December 2013, Allegri confirmed he would leave the club at the end of the season, telling Gazzetta dello Sport: "Of course this is my last Christmas at A.C. Milan". However, Milan reported that Allegri and his staff were relieved of their duties with immediate effect on 13 January 2014.

On 16 July 2014, Allegri was appointed as the new head coach of Juventus, replacing Antonio Conte who had resigned the day before.Although the decision to hire Allegri was initially met with ambivalence,on 2 May 2015, he guided Juventus to their fourth consecutive Serie A title, as the club defeated Sampdoria 1–0 at the Stadio Luigi Ferraris in Genoa; this was only the second time Juventus had won four consecutive Scudetto titles (the last time being from 1931 to 1935, when they won five Scudetto titles in a row). Having previously won the title with Milan in 2011, it also marked his second Scudetto title as a manager in Serie A. On 13 May 2015, Allegri guided Juventus to the Champions League final by defeating defending champions Real Madrid in the semifinals, 3–2 on aggregate, it had been twelve years since the Bianconeri had last appeared in the final, eventually losing to Milan 3–2 on penalties in 2003.A week later, on 20 May 2015, Allegri guided Juventus to a domestic double by helping the club win their record tenth Coppa Italia, defeating Lazio 2–1 in extra time. The Old Lady last won the trophy in 1995, breaking their twenty-year drought of having not won the competition, and making them the first team in Italy to win the trophy ten times.On 6 June 2015, Juventus were defeated by Barcelona, 3–1, in the 2015 UEFA Champions League final.

On 6 July 2015, almost a year after signing with Juventus, Allegri signed a one-year extension to his current contract keeping him at the club until the end of the 2016–17 season. On 8 August 2015, Allegri led Juventus to a 2–0 victory over Lazio in the Supercoppa Italiana, with new signings Mario Mandžukić and Paulo Dybala scoring the goals.Allegri was included in the 10-man shortlist of nominees for the 2015 FIFA World Coach of the Year Award,but was later not included among the three finalists, despite almost completing a treble in his first season as Juventus's coach.However, on 14 December 2015, Allegri won the Serie A Coach of the Year award,and later on 7 March 2016, his second ever Panchina d'Oro for his success with Juventus during the 2014–15 season.On 25 April, Juventus were crowned 2015–16 Serie A champions; after initially struggling during the first ten league matches of the season, Juventus went on an unbeaten streak and won 24 of their next 25 league games to come back from 12th place to defend the title.The team's unbeaten streak ended after 26 matches, and was broken following a 2–1 away loss to Verona on 8 May. On 6 May, Allegri extended his contract as Juventus manager to 2018. On 21 May, he led Juventus to the domestic double once again after a 1–0 victory over Milan in the 2016 Coppa Italia Final, the first team in Italy to win back-to-back doubles.

On 17 May 2017, Allegri led Juventus to their 12th Coppa Italia title in a 2–0 win over Lazio, becoming the first team to win three consecutive championships. Four days later on 21 May, following a 3–0 win over Crotone, Juventus secured their sixth consecutive Serie A title, establishing an all-time record of successive triumphs in the competition.On 3 June 2017, Allegri entered his second Champions League Final in three years with Juventus, but suffered a 4–1 defeat to defending champions Real Madrid.[43] On 7 June, Allegri renewed his contract with Juventus until 2020.Allegri took charge of his 200th game with Juventus on 9 February 2018, a 2–0 away win over Fiorentina.[On 9 May 2018, Allegri won his fourth consecutive Coppa Italia title, in a 4–0 win over Milan.Four days later on 13 May, following a 0–0 draw with Roma, Allegri secured his fourth consecutive Serie A title, becoming the first manager in Europe's top five leagues to win four consecutive doubles. On 17 May 2019, after Juventus had already secured its fifth straight Scudetto under Allegri on 20 April, Juventus announced that he would leave the club at the end of the season.