By AceQty (self media writer) | 1 month ago 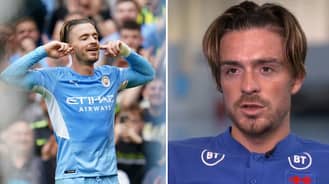 The former Aston Villa player now a manchester city star did an interview after their game, "England vs Hungary", where some people branded him "classless". Grealish was a subject of criticism even before their game. This came about after fans and non fans realized that Gareth Southgate had called him for his first eleven and he wouldn't start off from the bench.

The people who branded him "classless" had their reasons saying that he only managed to start for the international team after he moved to a "big team". Clearly stating that he couldn't have been Southgates first choice if he was still at Aston Villa. Grealish didn't take the critics so well and responded to his haters.

He said, " For me to playing in the biggest games for England, I needed to be doing that at club level also".

The interview was majorly about his release clouse that he had put in his contract the previous year when he waa still at Aston Villa. Being that he was the captain of Aston Villa, and a dedicated player while he was there, many people admired him and even idolized him. His response wasn't received so well by some fans from his former club where they said that he was diminishing the club and that he didn't look like he wanted to stay anyway. They also said that he was giving an " i can't wait to get out of this club" kind of vibe.

Seems like his departure really hurt so many people as he was considered the best in that club and maybe no one thought he would ever leave. But all in all, players too have dreams and progressing to the next level should be understood by fans as they consider football a real career. So who wouldn't want to go for bigger deals if presented with a chance?