Chelsea Dominates The All-Time Lineup For London, With Arsenal And Tottenham Having Only 4 Slots

By KatambeNews (self meida writer) | 1 months

Football is the most popular sport, both in terms of participants and spectators, in London. London has several of England's leading football clubs, and the city is home to thirteen professional clubs, several dozen semi-professional clubs.

In English Premier League, London has several big clubs including, Chelsea, Tottenham Hotspurs, Arsenal, West Ham, and Crystal Palace. This is a good thing since it creates rivalry in London thus making football a beautiful game to watch.

In London, the Club that has dominated most is Chelsea, Followed by Arsenal and now Tottenham. The Blue has more legends than any other Club and this can be confirmed with the lineup that has been created for the all-time XI for London.

In this lineup, Chelsea has taken 7 out of 11 positions with Arsenal taking 3 and Tottenham taking only 1. The legends in this lineup are Cech in the goal, Cole, Terry Campell, and Azpilicueta taking the defence, Hazard, Lampard, Viera, and Bale taking the midfield and attacking midfielders while Drogba and Henry take the front two. Below is the lineup. 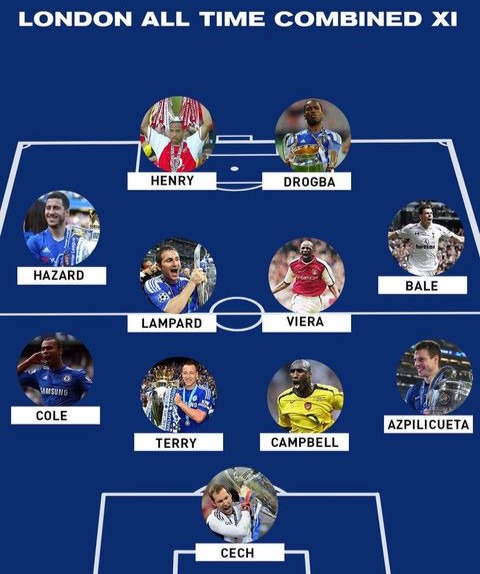 Great News From Man United After A Player Agrees To Sign A New Contract.