Football Kenya Federation Premier League season 2021-2022 kicks off this weekend with matches scheduled to be played across the country.

Tusker FC are the defending champions after winning the previous season's championship sponsored by BetKing betting company who cut short their deal with FKF.

Even as the new season kicks off, the game continues to face the Covid-19 pandemic challenge that has denied fans to have a taste of the game they love as restrictions bar them from attending the matches.

Promoted side Vihiga Bullets Football Club has advised the their fans to stay away from the stadium as the team plays its first top flight football game at Bukhungu Stadium in Kakamega County. This is a restriction by the football governing federation to curb the spread of the virus.

“Due to the covid-19 protocols and measures to curb the deadly virus and the instructions from the fkf. All the fans will not be allowed to the stadium today.” reads a post from the club.

“To all the fans. Sorry for the inconvenience and we appreciate your support.” end of statement. 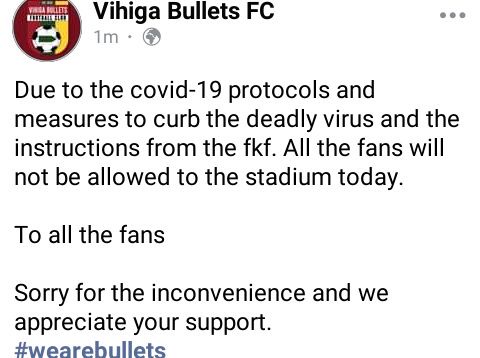 The team, under leadership of former Vihiga County Governor Hon Moses Akaranga is coached by Evans Mafuta who took over from Edward Manoah last week. The club announced that Manoah had retired. Mafuta will be assisted by Terra.

Bullets finished second behind FC Talanta and were joined by Kenya Police FC who drowned Vihiga United in the FKF playoff. Vihiga lost 2-1 in aggregate.

In the next four fixtures, Vihiga Bullets will take on Posta Rangers, Kariobangi Sharks, FC Talanta and Kakamega Homeboyz.