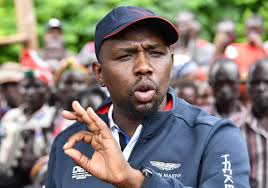 The political class enjoys world class soccer especially that of the premier League. Among the politicians who have declared their favorite clubs include Kipchumba Murkomen and Senator Ledama Ole Kina. Murkomen is an ardent supporter of Manchester United while Ledama, just like many Kenyans has always been on the Arsenal side.

In a hot match between Manchester United and Tottenham Hot Spurs, United was mercilessly crushed. Tottenham scored 6 goals against United's one goal. The only goal for united was scored by Bruno Fernandez through a penalty shoot out at the second minute. Generally, Manchester United has been grappling with ball possession and aimlessly losing passes to the Spurs.

The biggest blow came in when Anthony Martial was given a red card leaving united vulnerable and less in number. Indeed, these are hard times for Manchester United; both the fans and the players. Murkomen has offered a lasting solution which kind of comes as a warning, that as long as Ole Gunnaer is still the boss, then Manchester is going nowhere. The vocal senator calls for the exit of Ole.