Red Bull started this European campaign briskly - a draw and two wins, resulting in seven points after three rounds. But the Bulls suffered two defeats away to Lille (0-1) and Wolfsburg (1-2) in the second leg.

Sevilla is second in the Spanish championship, eight points behind Real Madrid. The gap to fifth-placed Real Sociedad is two points, but Sevilla have a game in hand. And they are only third in the Champions League. They are one point behind Red Bull Salzburg and two points adrift of runners-up Lille. The gap to last-placed Wolfsburg is also one point.

After the break, the Wolves are in bad shape, and it cannot be ruled out that Wolfsburg will also change their second coach during the season. On November 20, the Greens and Whites were at peace with Arminia and then suffered three defeats in a row: against Sevilla, Dortmund and Mainz.

Before the start of the Champions League group stage, we thought that it would be the Mastiffs in their group that would not qualify for the European spring. But so far, it looks like Lille will still play in Europe.

These teams had several chances to take the top-most spot, and qualify for the knockouts earlier itself. But they squandered away all of their opportunities, and on this final match-day, they will have to battle it out for the second and final ticket to the Round of 16.

Wigan is on top of their form this season with continuous wins in last three matches. They have not lost in their last nine matches and have scored 17 goals in total.This team has only failed to score only once and have score 2 or more goals in eight of these matches.

Shrewsbury has not played well this season and only has five wins so far. 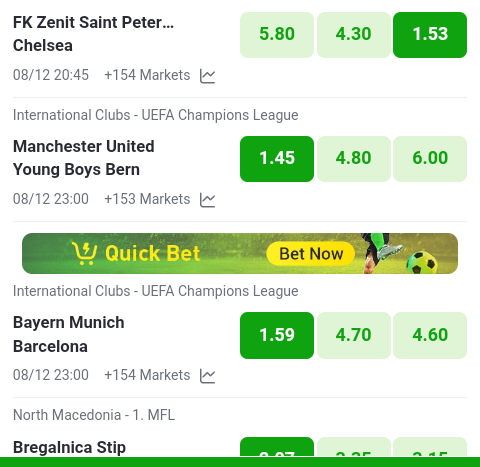 Monday Super Predictions To Bank On

Uhuru Was Right, Manyora Affirms, Names Two Leaders Who Will Give DP Ruto a Lifeline Against Raila

Check What Happened To Ruto In Jacaranda On Sunday (Video)

Today's 5 Well Analysed matches to place a bet on.