By d_onalvine (self media writer) | 1 month ago

What a night it was, John Cena and Roman reigns, the match took very long time and John Cena got exhausted making Roman reigns to take advantage, Roman reigns speared John Cena to retain the universal championship. After the match we were took by surprise and guess what the beast is back, Brok Lesnar. 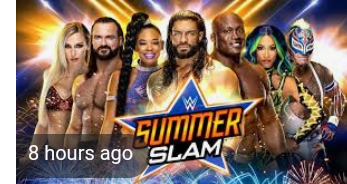 Goldberg was dominating the match against Bobby Lashley, when he took Bobby Lashley down and charged for a spear Mvp goes on to pull Lashley out, Lashley managed to put Goldberg in the hurt lock to win the match.

Edge defeated Seth Rollins by submission this is after Edge managed to put Seth in a crippler sleeper.

The triple threat match was under way. Rhea Ripley tried a Rip tide on the champion but the champion encountered it with a DDT, Charlotte comes from behind to lock Nikki with a figure 8 leg lock to win the raw womens championship.

Becky defeated Bianca via pinfall to become the new smackdown champion for the women's division.

Content created and supplied by: d_onalvine (via Opera News )