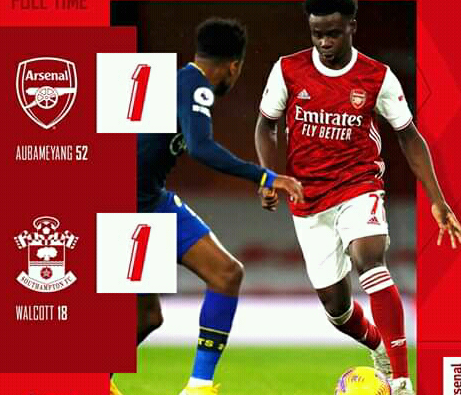 Arsenal were held by Southampton at Emirates Stadium 1-1 yestday after defender Gabriel Magalheas was shown 2 yellow cards amounting to a red card. Captain Aubameyang scored his second in play goal since scoring against Fulham at Craven Cottage to redeem himself from previous weekend humiliations where he scored an own goal. Following the draw Arsenal are currently 15th with 14 points while Southampton moved up to position 3 with 24 points. Chelsea lost their ground on the title race after losing 2-1 to Wolves to drop down to position 6 with 22 points while Manchester City drew 1-1 with Westbrom to remain 8th with 20 points. 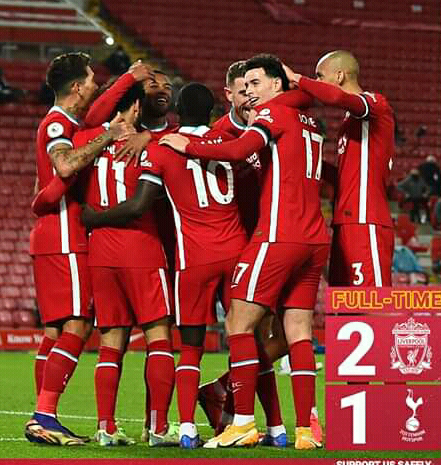 Liverpool moved up to the top of the Premier League table standings after edging Tottenham Hotspur 2-1at Anfield. Mohammed Salah & Robert Firmino scored Liverpool goals while Hueng Min Son scored the only Tottenham consolation goal to move on level with Dominic Calvert Lewin & Salah at the top of Premier league top scorers with 11 goals. Liverpool are leading the Premier league table standings with 28 points after 13 games played, where they have won 8 & drawn 4 matches. Tottenham Hotspur are second with 25 points while Everton joined the top 5 after winning 2-0 at King power stadium against 4th placed Leceister City to move to 23 points. Manchester United will be playing bottom anchored Sheffield United at Bramall Lane tonight in quest to move into top 5 if they won with over 3 goals margin. 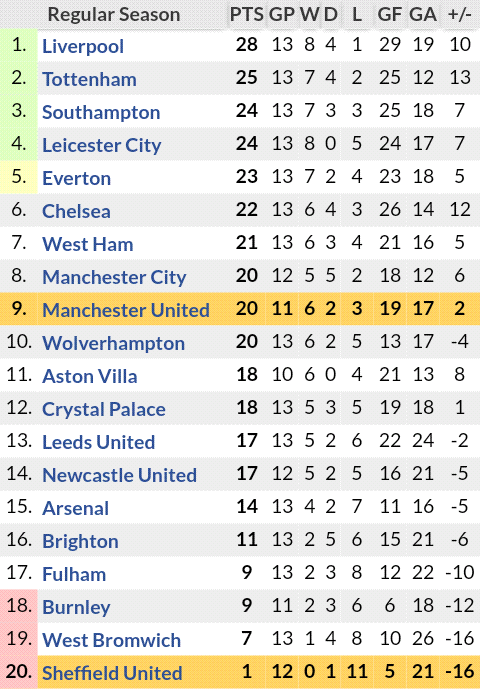