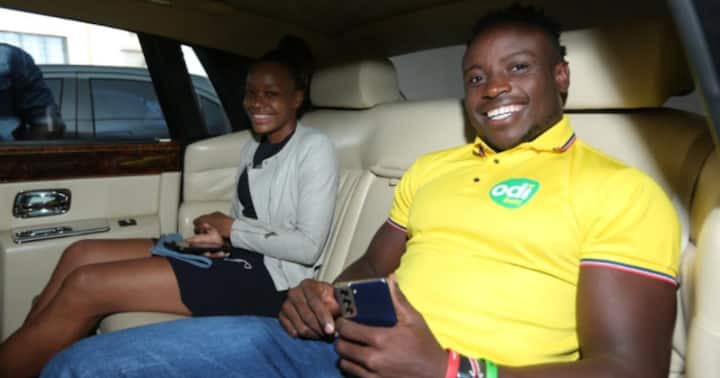 Picture: Ferdinant Omanyala with his girlfriend in a past event. (image credit/ Tuko)

Kenya's 100M athlete— Ferdinant Omanyala is making huge strides in his achievements days after coming second in the Kip Keino Classic tour. Omanyala became the second in those games and was crowned Africa's fastest man with a record of 9.77 seconds.

After showing his talent in the Olympic games ended last month, Omanyala received a boost from a deal he was given by Kenya's betting company— Odibets. Again today, he was gifted a vehicle by the Odibets company in front of his family.

When given a chance to speak, Omanyala said he is proud of the achievements he has made, and promised to work even harder. On the accounts of his training, he said his girlfriend has been very supportive to him even before he came to the limelight. During COVID-19 season, Omanyala narrated that he was jobless and the only thing he could do was to train for the run, though he did not know the talent could take him far.

Speaking at the event, Omanyala noted that his girlfriend used to pay his bills including the house rent since she had a job. He, however, promised that now he can afford more compared to last year, he promised to take care of her and provide for anything she will need.

“I was training without goals and we had no money but thanks to my girlfriend as she was paying the rent and bills because she was working. She would bring money to the table and allocate some to my training, rent and food” said Omanyala.

You can see his full video revealing his girlfriend's actions here.

Man, 23, finds 'I will kill you' message scrawled in tooth-paste on bathroom mirror

Man Stabs His Neighbor To Death After Arguing Over Sh400 Debt.

Have You Seen Her? 6-Year-Old Girl Reported Missing Just Hours After Leaving School