By M'imunya (self media writer) | 3 months ago

The visitors walked off the pitch at the Corinthians arena after the officials came out to stop the game.This dramatic intervention came out brazil health authority said four England -based player for Argentina had not adhered to quarantine rules . 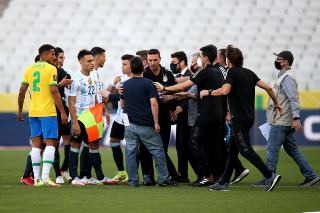 Although it did not name the four, the players with English Premier League clubs are Emiliano Buendia and Emiliano Martinez of Aston Villa and Giovani lo Celso and Cristian Romero of Tottenham Hotspur.

Martinez, Lo Celso and Romero all started the game in Sao Paulo.

Around one hour after the game was suspended and while Brazilian players organised an impromptu training session on the pitch, South American football's governing body Conmebol said in a statement: "By decision of the match referee, the match organized by Fifa between Brazil and Argentina for the World Cup Qualifiers is suspended. 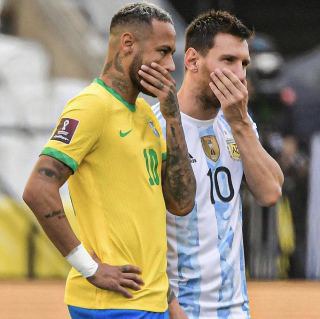 "The referee and the match commissioner will submit a report to the Fifa Disciplinary Committee, which will determine the steps to be followed. These procedures strictly adhere to current regulations."

Under Brazilian rules, visitors who have been in the UK in the 14 days before entering the country must quarantine for 14 days on arrival.

"We got to this point because everything that ANVISA directed, from the first moment, was not fulfilled," Antonio Barra Torres, director at Brazil's health regulator Anvisa, said on Brazilian television, according to AFP.

"[The four players] were directed to remain isolated while awaiting deportation, but they did not comply. They went to the stadium and they entered the field, in a series of breaches," the official added.

Content created and supplied by: M'imunya (via Opera News )