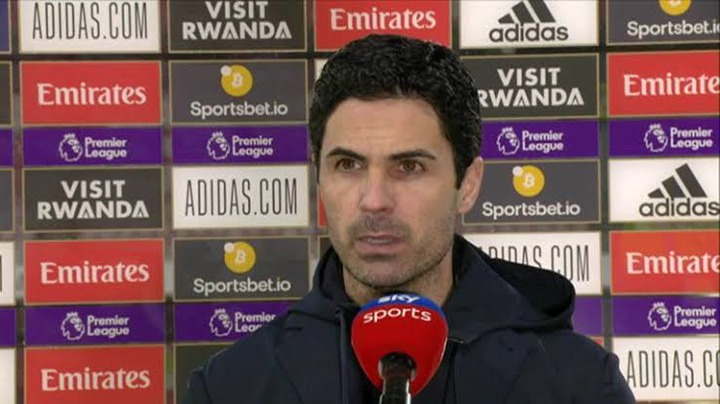 Arsenal manager Mikel Arteta apologises after a defeat by The reds (Liverpool). Marking his 50th game in premier league, Arteta has lost seventeen matches this being the worst record for Arsenal. After the match yesterday Arteta apologises to the fans as the fans were furious because arsenal did not play that match with an attitude of winning it. Fans said Arteta is supposed to start Gabriel Martinelli in his first team, They also go on saying that The manager (Mikel Arteta) is wasting the youngster's talent, This is week after Martinelli scored a superb goal in training with Arteta seeing that goal, Arteta responded to fans that Martinelli is expected to say which position exactly is he supposed to play. Arsenal manager told Arsenal fans to be calm and trust the process, Arsenal is expected to face Slavia Prague on thursday in Europa league quarter finals, Fans are expecting good results on that they as they really need to win the trophy so that they will be able to play in Champions league next season.

Content created and supplied by: Skysportnews001 (via Opera News )

Friday's Seven(7) Matches To Bank On

"They Have The Quality And Quality" Bayern Chief Praises Chelsea