France striker Olivier Giroud discusses his return to the national team after missing the Euros last summer in an interview carried on Téléfoot this morning. The Milan striker has also set himself the ambition of becoming his country's all-time leading scorer — his 47th goal against Ivory Coast on Friday left him just four goals behind the current leader, Thierry Henry. 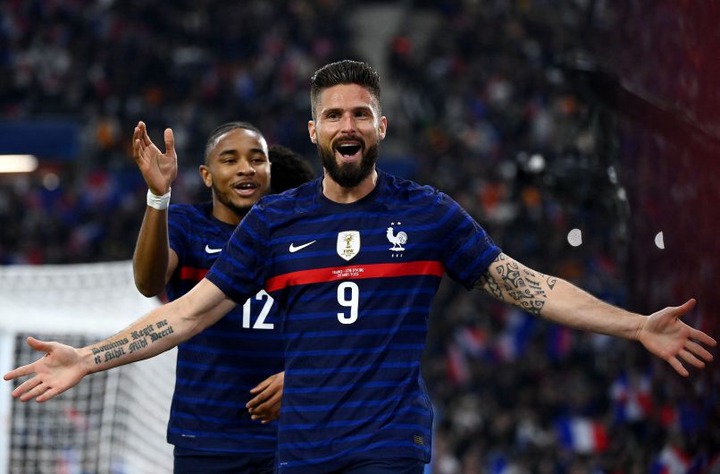 "Rediscovering this cockerel [the France insignia], this jersey, and the Clairefontaine friends makes me joyful." Regardless matter the circumstances, you must constantly believe and never give up." "I'm a competitor. I have various goals, one of which is to pass Thierry Henry."

"Do I see myself as a fantastic sub at the World Cup?" Who could refuse the opportunity to attend a third World Cup?"

In a friendly in Marseille on Friday, AURELIEN TCHOUAMENI scored two minutes into added time as France recovered from behind to defeat Ivory Coast 2-1. The Monaco midfielder scored the game-winning goal from a corner as an inexperienced French squad defeated a well-known Ivory Coast side.

Ivory Coast took the lead in the 19th minute when Arsenal striker Nicolas Pepe blasted a shot off the inside of the near post and beyond Tottenham goalkeeper Hugo Lloris.

Five minutes later, Olivier Giroud equalized with a header to close in on France's all-time international scoring record. Deschamps added, "He still has this ability to score, especially with his head." France now has 47 goals from the former Arsenal and Chelsea striker. With 51, Thierry Henry is at the top of the list. "Obviously, he was ecstatic about it." He's back in the squad, which he fully comprehends. And it's all for the better for us," Deschamps remarked.

Content created and supplied by: Siasa_254 (via Opera News )