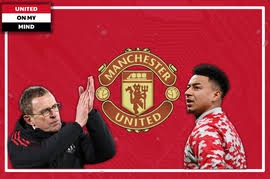 Manchester United suffered a heart break defeat against championship side Middlesbrough. The red devils are now remaining with champions league as the only hopes available if they are to win any trophy this season. The premier league giant's interim manager has hit out on Jesse Lingard after he missed yesterday's game. Rangnick had told the press that the England international had asked for a break after the transfer rumours that has been on air although January.

The 28 year-old has come out to twit that the club advised him to take a break and it was not his will as stated by the manager. This has created concern in social media fans demanding to know who is right and who is wrong.

The club’s number 14 has some making up to do to win over the supporters, because most fans see Lingard right now as a player who simply does not want to be at the club, an unwanted distraction off the pitch, and one that has contributed little on it for this club for the majority of the last three years.

The red devils will be returning to action on Tuesday night in a premier league clash. Lingard is expected to be given more playing time now that the club will not be having Greenwood and no signing was made.