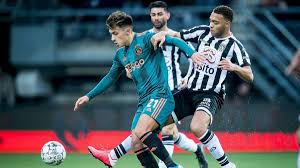 After a long month of the summer involving up and down transfer business, the Red Devils eventually confirmed the signing of Feyenoord left back ,Tyrell Malacia as their first signing of the summer.

However, the businesses doesn't there ends there since the deal for Lisandro Martinez is also on of card for the Old Trafford ranks after the Argentine told Ajax of his Premier League preference.

Accordinh to reports by the Evening Standard, Manchester United and Arsenal have entered into a bidding war for the signature of Ajax defender Lisandro Martinez, the Argentine has now ‘informed’ his current club of his transfer preference ahead of a departure this summer.which has provided United with a big boost in their pursuit of the centre back, as they look to tie up a deal .

Player met with Ajax yesterday after returning to Amsterdam and spoke out his ambitions to move to the Premier League. Feeling remains that Utd would have an advantage if bids are accepted because of Erik ten Hag's key factor ,

Erik ten Hag remains keen to reunite with his former player at Old Trafford and has already told United seniors to complete a deal ‘by Friday’. United have already submitted a formal offer of around £37 million for his services.

Total Number Of Form 34As From 6 Counties That Have Not Been Uploaded As At 6:00pm On IEBC Portal