By Adego_Writes (self media writer) | 2 months ago

Today October 1, football fans will experience the thrill of one of the greatest London derbies as in-form Arsenal host their rivals Tottenham Hotspurs at the Emirates Stadium at 1430 EAT. The game will be a clash of the titans between the leaders of the English Premier League, Arsenal and Tottenham who are currently third with just one point gap between the two sides. 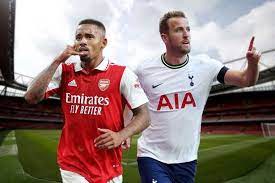 Arsenal have won six of their first seven EPL matches and only lost one while Tottenham have won five and drawn three. The two sides also have an almost equal goal difference with Arsenal having 10 while Spurs have 11.

It is a difficult game to predict a direct win but the most likely pick for a gambler could be going for the corners, fouls and goals.

Tottenham have won three of the last five winnings with Arsenal bagging only two. According to recent statistics, a draw is a more unlikely outcome between these Londoners. Either sides have an almost equal chance of getting a win from this crucial game.

Basing on the fact that this is going to be an attacking contest, there is a high chance for more than 12 corners from the match.

Two goals or more outcome is also 99 percent likely to happen. If you are in pursuit of high odds you could try going for the Both Teams To Score pick.