Arsenal urged to shelve their other transfer plans and go all in for top-ace trouble for defenders.

By Sportsmann (self media writer) | 10 days ago

Arsenal are currently being linked with a move for either one of these two of the best Premier league strikers, Ollie Watkins and Dominic Calvert Lewin. Although it would be revolutionary if they were to get any one of them, Darren Bent thinks Arsenal are looking at the wrong targets. Darren Bent believes Brentford's Ivan Toney is the real deal, and in his own words, speaking on a show at Talksport, here is what he had to say about Arsenal signing him. "Could they lure him away from Brentford? Well, of course. Yes (he would be a good fit for Arsenal). It’s early days. But what he has shown so far at Brentford is that he is the real deal, not in terms of his goal return, but just the way he bullies people and he never shies away from a challenge. I think he is definitely destined for big things." 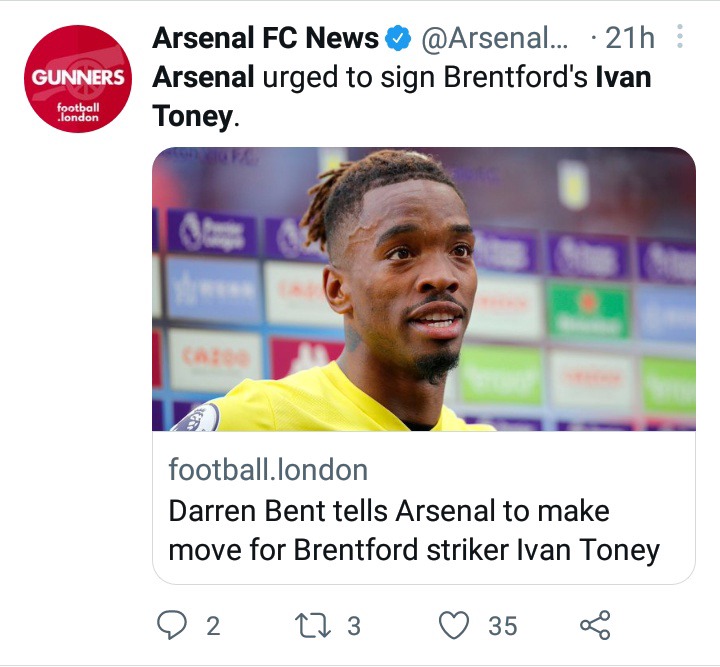 Toney, on the other hand, a while back after thrashing Arsenal 2-0 in the league opener, when asked about why Arsenal were struggling (in an interview with Baller Talk), said the following. "I just didn't see them how they used to be. You used to look at Arsenal and think (they were) crazy and they were going to win this game, win this game. These days, I don't see them winning anything any time soon... Until they get a striker. " Do you believe Ivan Toney was sending a "come and get me" plea and is he the quick fix Arteta can bring from the market to finally solve his striking problem?

In the Championship last season, Tony managed to score 33 goals in 48 appearances. He has already scored two goals in seven appearances this season.