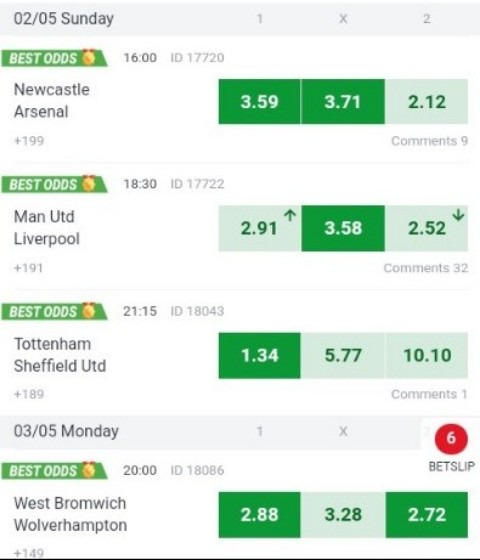 Manchester United are unbeaten in their last seven matches.

Liverpool have one win in the last five matches.

Liverpool have failed to beat United in the last two meetings.

Arsenal have no win in their last three matches.

Arsenal have one clean sheet in 12 league matches.

Newcastle United have one loss in the last eight league matches.

Newcastle United are unbeaten in the last four league matches.

Newcastle United have failed to score in one of 10 home league matches.

Wolves have lost three of their last five matches.

West Bromwich Albion have conceded the most goals in the league this season.

West Bromwich Albion have one clean sheet in the last five

Wolves have two clean sheets in their last six away matches.

Tottenham have four wins in five league matches at home

Tottenham have one win in their last five matches.

Sheffield United have no clean sheet in 16 away league matches.

West Ham have conceded two or more in four of the last five matches.

West Ham have two straight losses heading to this game.

West Ham have lost three of their last four away league matches.

Today's Matches That Will Give you Good Money

Thomas Tuchel Rules Out One player Against Manchester City Today.