By Moselaws (self media writer) | 1 year ago 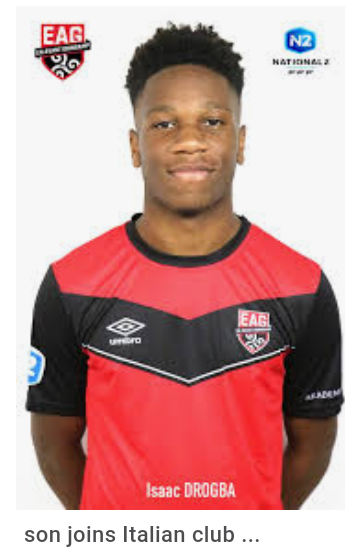 Didier's son Isaac Drogba who is 20 years old has started his international duty in Italy for Folgone Caratase team. Isaac's father Didier is a legendary footballer who played for Chelsea at Stamford Bridge and the Ivory coast national team.

Isaac should be working hard to be like his dad who made his country and Chelsea football club proud. The 20 year old playing the striker role, managed to net a winning goal for his side. Isaac converted a free kick and pass from his team mate to get the ball past the goal line.

That fine finish from the young striker with similar celebrations like his father's reminds us of his father at Chelsea when they won the premier league.

Isaac joined the club in February this year, scoring his first goal in his third appearance for the club. Prior to joining the Folgone, Isaac played for Guingamp who released him last year at the end of the contract.

Do you think he will break his father's records?