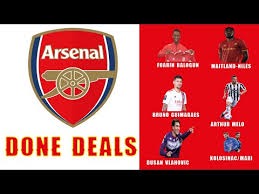 Arsenal fans are excited with the move of the club in this January transfer window. The club has been in a long wait before agreeing the first signing but as reports from sources near the club indicate, the club is close to announce double transfer. The gunners have been slow in their move for the players but it's believed that they are filtering out quality and the ones that their budget allows.

Breaking News from the club indicate that Vlanovic deal is done and medical is scheduled before Monday. The Serbian international has been targeted by the north London club for sometime but things seems to go on their way.

The 21 year-old could be Aubameyang's future replacement with the gunners willing to release the Gabon international. The 31 year-old is wanted by Juventus and Barcelona. Arsenal manager Mikel Arteta want to bolster his squad with aim of playing in champions league next season.

Arsenal are also convinced that Juventus Star Arthur Melo willing be joining them in this January transfer. According to Gazzetta dello Sport, the Old Lady want to sanction an 18-month loan deal, or negotiate a bigger financial commitment from Arsenal.The Gunners were hopeful of signing the Brazilian on-loan until the end of the current campaign.