Manchester united players are privately questioning the club's decision to sign a top star during the summer, according to one respected journalist. The red devil's had an eventful transfer window as they brought in three big names. First came the signing of Jason Sancho from Borrusia Dortmund. The england international was heavily linked with Manchester united in 2020 but club chiefs could not get a deal over the line. 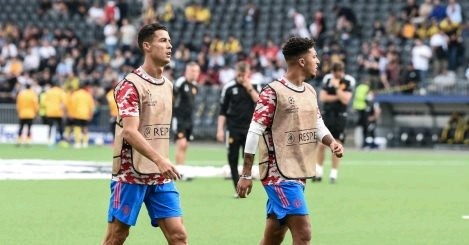 They were successful this time around and the winger penned a five year deal at old trafford. Next came the arrival of Raphael Verane from Real Madrid. Manchester united parted to land the world cup winner, who is viewed as one of the best center backs in the world. Their deadline day capture of global superstar Christiano Ronaldo was one of the biggest transfer of the summer. He turned to Manchester united for a reported €12.85m, which will be paid over the next few years.

Despite their impressive signings, Ole Gunnar Solskjaer jas come under pressure recently. Manchester united dropped points to Aston Villa and drwa to everton before the international break. Their 4-2 defeat to Leicester City on Saturday was particularly disappointing late goals from Jamie Vardy and Patson Dak a handed Brendan Rodgers side all three points. The Times reporters Duncan Castle provides an update on what's going on in the Manchester united dressing room.while appearing on the transfer window podcast, castles stated that players were starting to question sancho's arrival.

The attacker is get to register a single goal or assist after ten appearance. He has regularly been used as an impact substitute so far this campaign. Sancho's team mates are starting to wonder if he worth the huge price tag. The player's attitude in training has also been questioned, leading to rumors that he is causing problems at the club.