Hvidovre will want to continue from where they left off last time out with a 0-2 1. division victory vs Jammerbugt.

Over their past six fixtures, Per Frandsen's Hvidovre have found the net a total of 11 times giving them an average number of goals per match.

HB Køge will come into the meeting following a 1-0 1. division win with the downing of Nykøbing FC in their last game.

In the course of their 6 latest matches, Morten Karlsen's HB Køge have converted 10 times therefore earning them a goals scored per game average of 1.67. 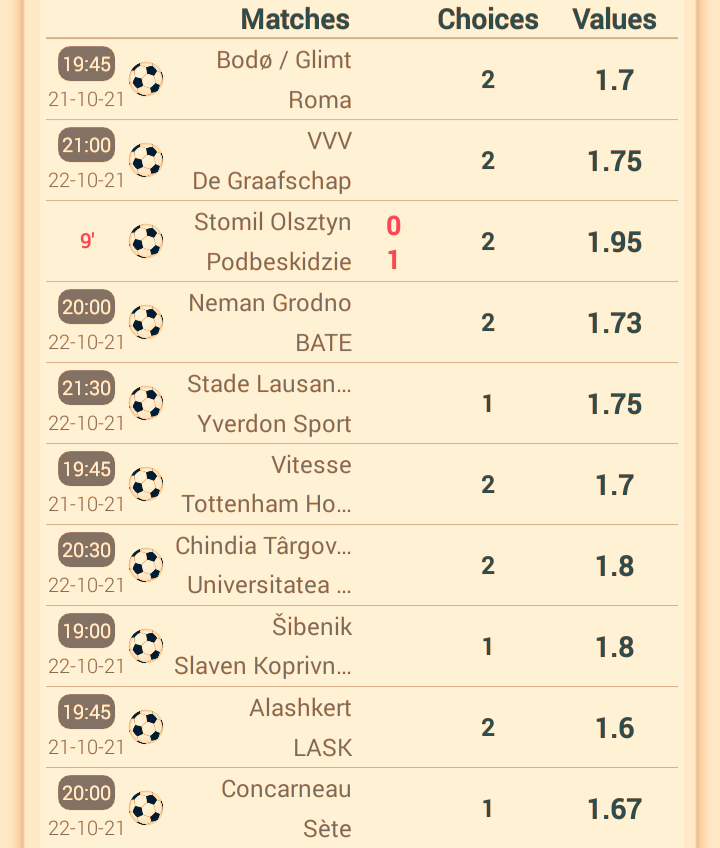 FC Lahti go into this match coming off the back of a 1-1 Veikkausliiga tied result versus FC Haka.

In that match, FC Lahti had 53% possession and 4 attempts at goal with 2 of them on target. The scorer for FC Lahti was Geoffrey Chinedu (2'). At the other end, FC Haka had 10 attempts on goal with 5 on target. Ishmael Yartey (34') scored for FC Haka.

It’s not been often in recent games where FC Lahti have managed to hold out for a full 90 minutes. The reality is that FC Lahti have failed to prevent opponents from scoring in 5 of their previous 6 games, letting in 8 goals along the way.

After a loss in their previous game against IFK Mariehamn in Veikkausliiga competition, AC Oulu and their travelling supporters will be hoping that they can get a better result in this one.

The only name on the scoresheet from AC Oulu was Nikolas Saira (84'). Elias Mastokangas (18') and Vahid Hambo (65') scored for IFK Mariehamn.

It has become apparent that AC Oulu have struggled for goals over their previous six encounters, netting the disappointing return of only 2. In those matches, Oulu have also seen the collective goal tally of opposing teams equal 10. Nonetheless, we will just have to wait and see whether that trend might be replicated in this upcoming game.

SJK prepare for this game following on from a 2-2 Veikkausliiga drawn result against Helsinki IFK.

In that match, SJK managed 55% possession and 11 attempts at goal with 3 of them on target. For SJK, the scorers were Ville Tikkanen (18' Own goal), Ariel Ngueukam (66') and Denys Oliynyk (78'). HIFK Fotboll got 8 shots at goal with 7 on target. Aldayr Hernández (94') scored for Helsinki IFK.

It’s been seldom in recent games that SJK have shown defensive steel. In fact, SJK have been scored against in 5 of their previous 6 games, shipping 11 goals on the way.

After a loss in their previous game against HJK in Veikkausliiga action, Ilves and their fans will hope to get a better result this time.

During their 6 latest matches, Toni Kallio's Ilves have converted 7 times thus giving them a goals per game average of 1.17.