By Jillnews.com (self media writer) | 8 days ago 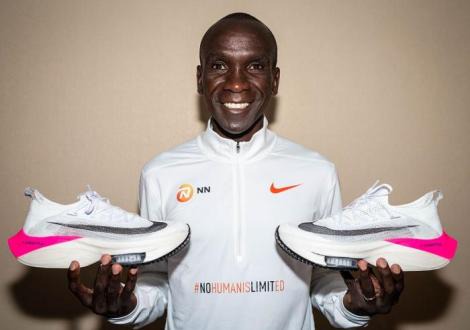 On September 25, Kipchoge, in collaboration with Catawiki placed some iconic items used by the marathoner throughout his career with the aim of raising funds for his Eliud Kipchoge Foundation, an organisation that supports education and environmental conversation.

Among the items that were placed on auction include his 2018 NN Running Team Singlet, with Catawiki saying the singlet attracted the biggest bid with the winning one being Ksh242, 471 (€ 1,893).

Kipchoge's Nike- ZoomX Vaporfly Next% 2 running shoes were auctioned at Ksh42393 (€ 331). The shoe was signed with a personal message from Kipchoge. A spacial running shoes was inspired by the model most loved by runners around the world. Improved comfort and breathability with its redesigned upper. 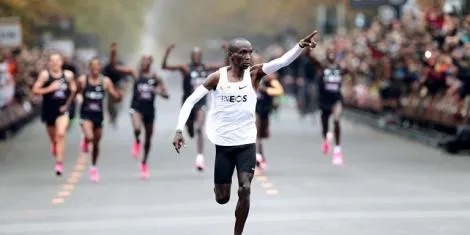 Kipchoge's running watch that was inspired by the Kenyan flag was also among the items placed on auction. The person who managed to walk away with the special signed watch had to part with Ksh48,673.

These were among the items Kipchoge worked together with Catawiki and placed on their website for a period of 2 weeks to raise funds for his organisation. The official bidding for all the items was closed on October 3. However, Catawiki has not disclosed the total cash that will be channeled to the Eliud Kipchoge Foundation.

"Catawiki hosts a charity auction in partnership with the Eliud Kipchoge Foundation, an organisation supporting kids education and environmentalism in Eliud's homeland of Kenya," they wrote on their organisation's website while opening the bidding.

They added, "all special objects on auction represent iconic moments from Eliud's running career, including a signed racing bib from the world record-breaking Berlin Marathon 2018."

The two-time Olympic champion who launched his foundation on September 9, expressed optimism that the foundation will benefit children in the society.

“I am very grateful to launch my Eliud Kipchoge Foundation today. My mission is to give learners in the world access to knowledge and education,” Kipchoge stated. 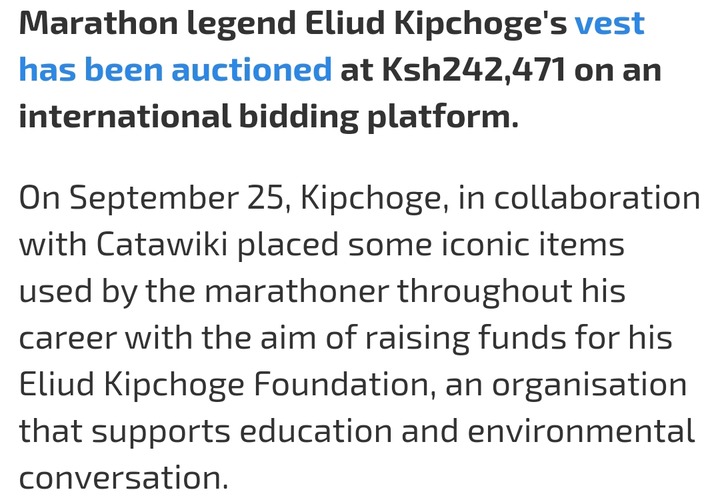