He started his career as a Goalkeeper now he is a new Totenham Manager.

By Zzzzzzzzz (self media writer) | 11 months ago

A goalkeeper during his playing career, Nuno represented Portugal at the 1996 Olympics and was part of the Porto squad that won the 2002/03 UEFA Cup and 2003/04 UEFA Champions League under Jose Mourinho.

He started as a goalkeeping coach after retiring in the summer of 2010, before being given his first senior coaching appointment two years later, with Portuguese side Rio Ave.

In his second season Rio Ave were finalists in both of the domestic cup competitions, qualifying for the UEFA Europa League for the first time in their history.

Nuno moved to Valencia, where he secured a fourth-place finish in 2014/15, while winning the Manager of the Month award in Spain three times.

He then spent a season at Porto before moving to England and Wolves.

His first season at Molineux was a triumph as Nuno led the club to promotion and the Championship title, finishing nine points clear.

Nuno began his coaching career at Rio Ave in Portugal before getting a big job at Valencia with friend and owner Peter Lim, leading Los Che to Champions League qualification. He later coached his former club Porto in 2016-17 before joining Wolves.

Tottenham Hotspur have signed Nuno Espirito Santo as manager, the club announced Wednesday. The 47-year-old Portuguese coach departed Wolverhampton at the end of last season after an impressive run with the club, leading them to Premier League promotion via winning the Championship, two seventh-place finishes in the top flight, Europa League participation and a 13th-place finish in the league last season. 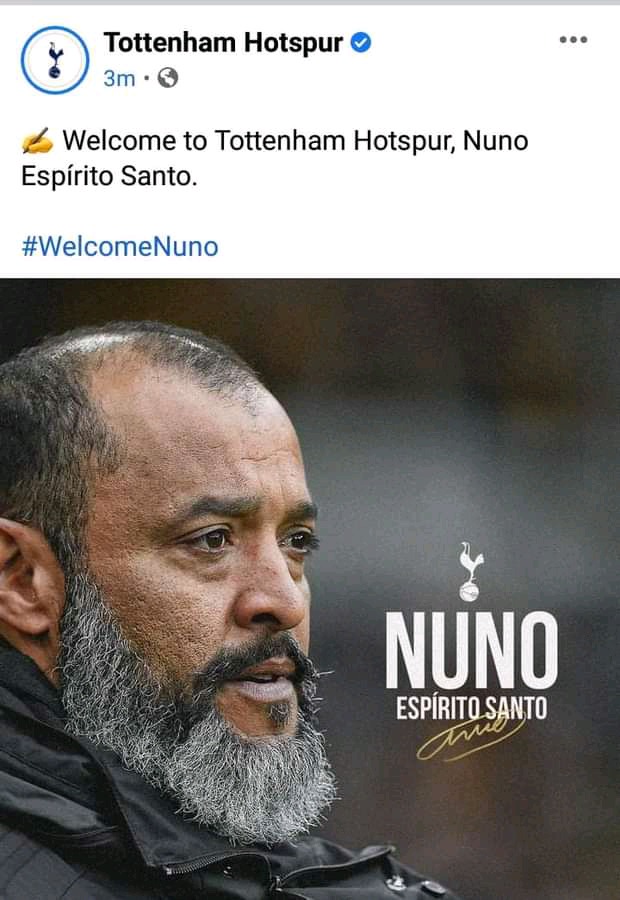 Content created and supplied by: Zzzzzzzzz (via Opera News )