By Destinyconnector (self meida writer) | 28 days

Former Chelsea forward striker Eden Hazard has today revealed his best coach of all the time in his career. Speaking to the Spain Sky Sport News today morning, Hazard says that former Chelsea coach was his best preferred manager. Eden is perceived as one of the best Chelsea players ever whom his name could be inked in the legend's club book.

"Actually Antonio Conte is my head. He helped me alot while we were at Stamford Bridge and he enriched me with quality skills during training" Eden Hazard told the Spain international Eurosport news today morning.

Antonio Conte is an Italian Professional Football Player and now he is the current Football Manager for Inter Milan Antonio Conte was also once a midfielder for Juventus where he displayed overwhelming performance during his era. His coaching role has impressed many as he has won many trophies in every club he has ever coached including Chelsea. 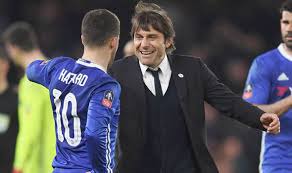 Eden Hazard is currently playing for the Los Blancoz side Real Madrid after he completed his permanent move from Chelsea in 2018 and joined Ancelloti's side. He was very important to the club as he played a very crucial role in Chelsea's win against Arsenal in Europa League final even though he left the club while they were experiencing a transfer ban.

Eden Hazard has today spoke about how Antonio Conte helped him to shine at Stamford Bridge and favoured him as his favourite manager. Antonio Conte coached Hazard after the club appointed him to replace Mourinho. He also left Chelsea after winning the FA cup final against the Red Devils at Wembley. 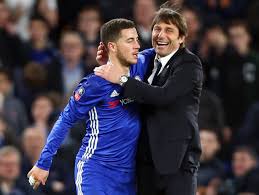 "I had been always intending to join Real Madrid but I was not committed with it but by the time the club decided to sack Antonio, that's where I played a central to push a move and sign for Real" says Eden Hazard.

Hazard claimed that Conte is a manager with unique and exceptional leadership qualities that everyone loves. He also claimed that it should be every player's dream to work under Antonio Conte. He however regretted of not winning the UEFA Champions League title together with Conte at Stamford Bridge.

" We won almost all the trophies except the UEFA Champions League and I really regret over it. According to my opinion, it should be every player's dream to work under Antonio Conte" Eden Hazard added. 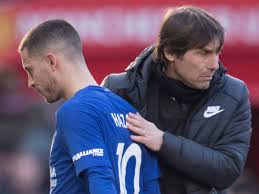 He further stated that he started to imagine joining the Los Blancoz side following the sacking of Antonio Conte and claimed that Sarri ball frustrated him and therefore forced him to push his move away from Stamford Bridge despite the club's inability to sign the new faces during that time.