By Tonywrites (self media writer) | 6 months ago

Arsenal left-back Kieran Tierney has cut short his holiday break to play for the gunners in the upcoming friendly clash against a Scottish side Rangers FC. 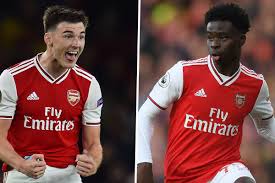 The Scottish man was expected to return for pre-season training next week after his Euro 2020 national duty with Scotland, but a chance to play Rangers has appeared to be too good to turn down.

According to talksport, Tierney is training with 90 per cent full Arsenal squad at the Oriam Performance Centre in Edinburgh.

Prior to joining the gunners for £25million in 2019, he played at Celtic FC where he maintained an impressive record against Rangers FC.

In his time at Celtic, Tierney won 10 times against Rangers and suffered just one defeat and two draws.

The move comes after Arsenal lost 2-1 in their pre-season opening match against Hibernian FC on Tuesday. Tierney might play in Arsenal's second match of the pre-season on Saturday in front of 2,000 fans for both teams.

Speaking to Scottish Media, Tierney expressed his happiness to play against his former rivals at Ibrox Stadium on Saturday.

"I’m really excited about playing back up in Scotland again.", the 24 years old left-back said.

Do you think Arsenal can impress next season?

Content created and supplied by: Tonywrites (via Opera News )