By Ripota_wa_mashambani (self media writer) | 2 months ago 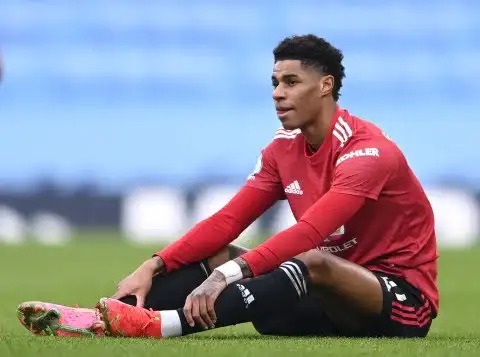 The first player on the list is French foward Anthony Martial. The Frenchman suffered an injury setback in March this year during France's World Cup qualifier against Kazakhstan. Although Martial has returned to training, he's working alone as a he continues his rehabilitation. With less than three weeks left before United's first Premier League game, Anthony Martial looks set to miss Man United's opener against Leeds. This is what the gaffer had to say about Martial "Anthony Martial has also joined us but he's not joined the team training yet. He's recovering from the knee injury and that looks good"

The second absentee is Alex Telles. Telles, suffered an injury during the team's training by accidentally twisting his ankle. "Unfortunately, Alex slipped and twisted his ankle so he'll be out for a few weeks. We are hoping that its not going to be too bad but he'll be out for a few a little while" Solskjaer said during a press briefing.

Tells injury is a big concern due to uncertainities sorrounding Luke Shaw's fitness. The Sun reported that Luke Shaw had broken his ribs but played on during England's Euro 2020. This could be a big concern for United, who only have inexperienced academy graduate Brandon Williams as the only fully fit left back.

Marcus Rashford has played with a shoulder injury since November last year. He's been playing through pain for Manchester United and England for almost a year. The England foward is contemplating undergoing an operation which could rule him out for two months. Rashford is a key United player who featured in 90% of all Manchester United games last season.

Manchester United are hoping for the best but should prepare for the worst incase their first team players fail to be fully fit for their opening fixtures.

Content created and supplied by: Ripota_wa_mashambani (via Opera News )