By Jepkoech (self meida writer) | 23 days 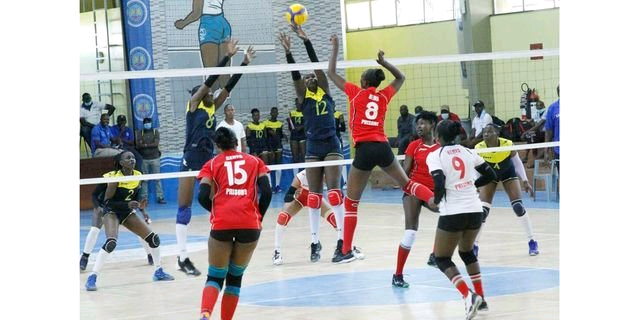 Both teams remain unbeaten heading into the clash that will decide who emerges champions.

The bankers beat Pipeline 3-0 on Friday before seeing off DCI with a similar margin on Saturday to take their tally to six points. On the other hand, Prisons have five points after edging DCI 3-2 on Friday and beating Pipeline 3-1 on Saturday.

"The win has rejuvenated the players and we are hopeful of a good show on Sunday. It will be a tough match but we hope to give it our all as the title is at stake," said Barasa.

KCB coach Japheth Munala acknowledged that Prisons were not push-overs.

"I can't really talk much about Sunday's clash against Prisons because expectations are high. But I hope that the players will rise to the occasion," said Munala.

Pipeline coach Paul Gitau made one change to the team that lost to KCB Women's Team 3-0 on Friday introducing Triza Atuka for opposite Miriam Chelimo. Atuka is a natural middle blocker.

In the balanced match, Prisons were quick off the blocks leading in both technical time outs leading 8-6 and 16-13. Once again, experienced duo of Brackcides Agala and Maiyo made the difference for Prisons as they opened the lead 22-20 before they took the set 25-22.

In the second set, Rose Magoi, Pamela Adhiambo and Atuka combined well at the net as they forced 13-13 ,15-15 ties before poor services from Pipeline gave advantage to Prisons who led 16-15 in the second TTO.

Pipeline's Metrine Nabwile and Adhiambo tore apart Prisons blocks for a 21-18 lead. Adhiambo, who is a darling of the fans, combined well with Yvonne Sinaida as Pipeline extended their lead 23-20 before they took the set 25-22 to level the set scores at 1-1.

In the fourth set, Pipeline coach rested Magoi and Atuka for Esther Mutinda and Chelimo as they led 8-7 in the first TTO. Pipeline's unforced errors was a gift to Prisons forcing a tie at 15-15.

Prisons coach Barasa then introduced Chemtai and setter Herma Kipyego for Maiyo and Joy Lusenaka but both teams tied 22-22, 23-23 before Prisons forced a 26-24 win.

Pipeline will Sunday play against DCI in the third place play-off.