EUFA Club rankings is out and Chelsea outshines Manchester United

By Godfreywilliams__ (self media writer) | 22 days ago

EUFA is the governing body of football all over the world. From time to time it releases updates about players ranking, clubs rankings and more so country rankings. Recently it released the list and the English premier League clubs have found their way into the top positions unlike ever before.

The German side Bayern Munich tops the list. This team is in top form. They have proven more and more that they deserve that first position. They have defeated big clubs recently hammering Barcelona three goals to zero. They have top players such as Robert lewandoski who was and is still the top scorer in all competitions. Currently he has scored seven goals and assisted once.

Manchester City comes second. It is of no doubt that Pep side are second. That kind of play, they have quality players. In the last EUFA Champions league they were finalists. Though they were defeated by Chelsea. 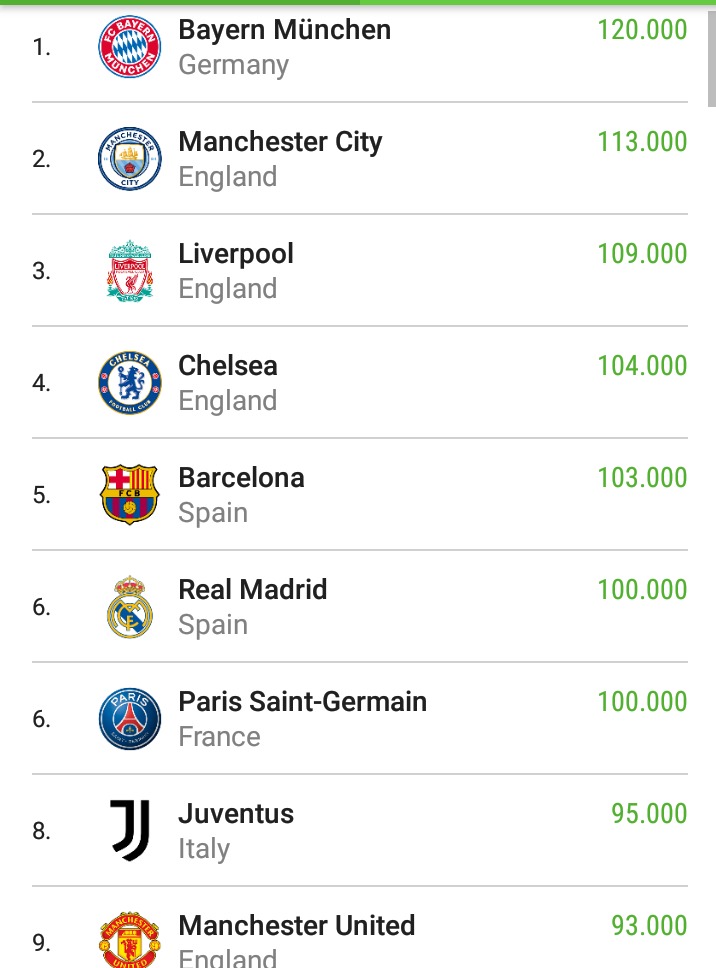 Liverpool FC are third on the list. This is another premier league side that has been dominant in Europe. Having won the champions League in 2019 season. They managed to reach the semi finals last season. Thanks to the contributions of their wonderful stars Mohammed Salah and Sadio Mane.

Chelsea FC are ranked fourth slightly above Barcelona of Spain. The English side managed to win the prestigious champions League in the season of 2020 and 2021. They have also won the club world cup trophy and the super cup. Their brilliance and hardworking is surely paying off.

Paris Saint Germain are ranked sixth. They played well last season. This season they have the strongest team ever with the most deadliest attacking trio consisting of Messi, Neymar and Mbape. Will they use this advantages to beat all the other best teams ?

Manchester United has dropped significantly to number nine. The English side have had tough times mosty in management where by since the exit of Sir Alex Ferguson it has been hard for them to pick up. Let's hope they will rise to that level again.

Do you think this rankings are ideal ? Leave your comments in the comments section below. Follow and like my channel to get more news and insights. Thank you for reading my article.

Content created and supplied by: Godfreywilliams__ (via Opera News )