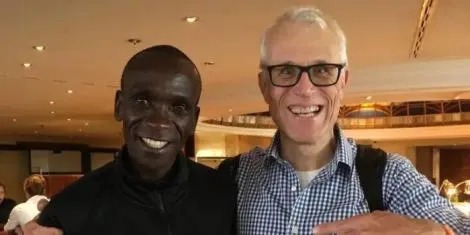 On Sunday, September 25, Athlete Eliud Kipchoge broke one of his many records when he ran the 42-kilometer BMW Berlin Marathon at a record time of 2:01:09.

As his star continued to rise, so did that of a crucial team member, Claus Schulke, whose sole purpose at the marathon since 2017 was to pass Kipchoge, an athlete who has come to be widely accepted as the Greatest of All Time (G.O.A.T.), bottles at specific points during the race.

Schulke's fame has acclimatised to a profile in the very esteemed pages of the New York Times where he revealed that their friendship, which hit mutual status, kicked off by chance when he volunteered to pass the bottles in 2017.

At the time, the volunteer who became to be known as Bottle Schulke was randomly assigned to Kipchoge. The athlete, however, noted quickly how being passed a bottle was quicker and more convenient that grabbing it at designated tables.

In 2018, his team invited the bottle-passing maestro into his hotel room ahead of the then Berlin race where they exercised, using a flower vase, the quickest way the exchange could be done.

“Before the race in 2018, I got a call from the race director who said that Eliud’s team wanted to meet with me at their hotel.

"I held the vase from the bottom, and he grabbed it from the upper part. That was the most efficient way of passing it," noted Schulke to the international publisher.

In the race, Schulke successfully passed 11 bottles and Kipchoge hit a new record of 2:01:39 and thanked him (Schulke) via a specialised message.

“Mr. Claus, thank you for helping me today. My world record wouldn’t have happened without you," Kipchoge wrote to him.

The message bonafide his role in Kipchoge's pursuit to be the greatest athlete that ever lived and Schulke was prepared to handle it.

It turns out, however, that being a part of an operation behind a force that breaks records can get an individual on age as it did Schulke who, four weeks before the September 2022 race, was nervous and did want 'want to be blamed for something that goes wrong or disturbing the record. The days before the race, it’s hard for me to sleep.'

To avoid dehydration, the drink is critical to an athlete's ability to refuel and perform optimally. The race fluids mainly consist of a blend of water, carbohydrates, and energy bars.

Before the race begins, Schulke usually strides along the starting lineup with his bicycle. As soon as the race starts, he takes off, all geared up and in with a backpack of bottles.

His technique is to wear a Kipchoge nameplate on his forearm, informing the athlete that he has his bottle. This allows Kipchoge not to break his stride or lose focus.

In September, Kipchoge broke his world record signaling that it was time to prepare for the next race.

How to Jump-Start a Car If Your Battery Is Flat

HISTORY: The Us Navy Trained Dolphins That Disappeared With Deadly Weapons On Their Bodies