The premier league which have been competitive this season has finally came to an end with Man City securing the title. 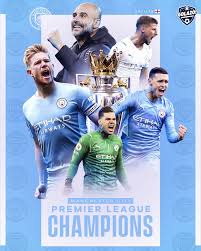 Liverpool first lost hope of winning the premier league in the opening minutes as they conceded an early goal , they were brought into Competition after they scored a goal to draw and Man City conceded a goal to lose 1-0 Against Aston Villa.

This went by till the second half when City conceded the second goal and Liverpool had just to score a goal to count on being champions.

After Cardiola made his first substitute and brought in Iker Gundogan,things turned around as we saw Man City comeback a 2-0 victory to 3-2 in less than 20 minutes , with the star scoring a brace.

Liverpool score 3-1 win but didn't have some impact as they had already lost the league.

Man U did qualify for Europa next season despite losing to Crystal palace 1-0. They were as well offered an upper hand by Brighton who won against West Ham,their rivals.

Burnley won't play Premier league come next season after they lost Against Newcastle and their rivals Leeds hold a draw against Brentford.

Son and Salah will both be awarded Golden boot as they tied on goals,23 goals.