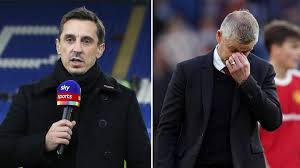 Few Manchester United fans have taken it online to demand sacking of their Manager Ole Gunnar after their 4-2 lose away at Leicester. Most of the fans attribute the teams poor performance to poor tactics employed by Ole. The Hashtag Oleout has been trending online and some Manchester United legends have commented on it with most of the legends fully behind their former teammate Ole for the job.

Zinedine Zidane and Conte have been pointed out by most fans as the right coaches who can deliver exactly what the fans expect of the club and when it was Gary Neville's turn to talk about the situation of the club, he ruled out the possibility of Conte coaching the club claiming that his style of play does not suit the club,"Conte won’t be the manager at Manchester United I don’t think. I don’t think they’ll go for that option, personally. He’s a great manager but I think certain managers fit certain clubs and I don’t think Conte fits United personally." Gary Neville. He did not talk about Zinedine however.

The board had earlier clarified that they are fully behind Ole and that his job is 100% secure. This comes even after Ole has registered poor performances since the beginning of this season with only five wins in all competitions. Manchester United fans pushing for Ole's sacking will have to wait a little longer to see the coach out of the club because the club's board is more than patient and willing to give Ole the time he needs to build the club.