Messi or Cristiano; Who is the Best?

There has been a lot of comparison between Lionel Messi and Cristiano Ronaldo about who is the best player. Their fans are always ready to fight each other, abuse one another on social media posts that undermines their idols. As football fans we are always advised not to take things that serious.

But I find it unfair when using trophies to compare players, because there are players who win trophies and have never stepped on the pitch or have played less games, an example is Danilo he has won almost every trophy in different leagues he's played, but he is not considered as one the best player.

So when it comes to trophies every player is important, it's not a one man army it's team work and that's why when Ronaldo got injured during the Euro 2016 final in the 25th minute the team still went on and won the cup without him. Messi might not have an international trophy but he puts effort the same way Ronaldo does to Portugal. Players should be compared by the work they put on the pitch, the individual awards given to them but not trophies.

When you look at the effort put by this guys on the pitch you'll realize that Messi does a lot than Ronaldo. Messi supplies the ball and also scores, most of the time you'll see him dominating the midfield creating pathways even though he's a striker while Ronaldo most of the time he's always infront just to score.

Messi dominated the major awards. He has 7 pichichi and always the best player maker while Ronaldo has only 3 pichichi awards, Messi has 6 ballon d'or while Cristiano has 5. In UEFA champions league Cristiano has dominated with the most goals and awards. Player of the year awards Ronaldo leads with three.

When you look at individual awards given to them it's difficult to determine who's the best but for me I'll always choose Messi over Cristiano ronaldo. 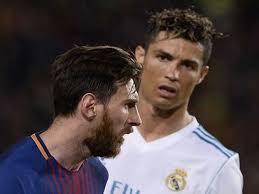