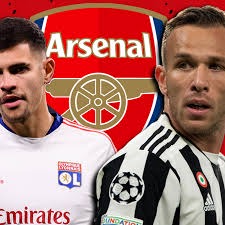 Arsenal have taken a long time to complete their first signing with Arteta determined to bring in more players. January transfer window shuts down in a weeks time with the gunners forward line still unsolved. The gunners will be looking to reinforce that area as soon as they announce the first signing.

According to reports from Italy Arsenal have reached the critical point with Juventus overs signing Brazilian midfielder Arthur Melo. The north London club has also agreed personal terms with the star and are on final paperwork before they can make it official. Arthur Melo has been outstanding in Serie A and could help the gunners in their race for top four.

Tuttosport reports that Arsenal have now accepted the terms of agreement with Juventus. The Turin side want Arsenal to take Melo for 18 months, rather than just the six for this season. And Tuttosport claims that despite initially not wanting to do a deal on those terms, the Gunners have now wilted and accepted.

According to Fabrizio Romano a renown sports analyst, Arthur could be on his way for medical today. The deal is on loan condition for 18 months with option to stay at Emirates. Arsenal manager Mikel Arteta has told Edu to start working on the forward line with Vlahovic still on top of their list.