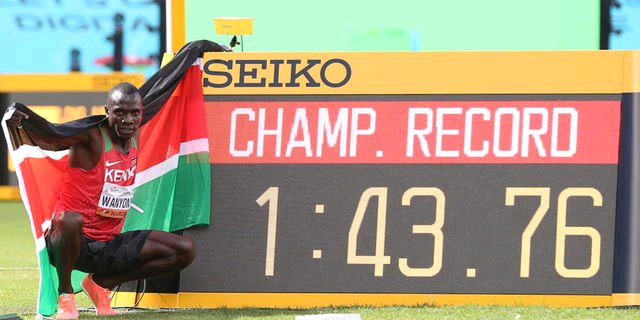 Emmanuel Wanyonyi celebrates after winning the men's 800m final in a Championship Record during the World Under-20 Athletics Championships at Kasarani on August 22, 2021.

Wanyonyi Sunday sprinted past Algeria's Mohamed Ali Gouaned at the home straight to win in a new Championship Record time of one minute 43.76 seconds

Gouaned held on to second place in a national Under-20 record time of 1:44.45 as Kenya's Noah Kibet sealed the podium in a Personal Best time of 1:44.48

Emmanuel Wanyonyi Sunday helped Kenya preserve its dominance in the men's 800m when he cracked a Championship Record time to triumph on the final day of the World Athletics Under-20 Championships at Kasarani.

Wanyonyi rallied two places from behind with 200m to go, taking a blistering one minute and 43.76 to win and erase Amos Nijel’s previous Championships Record time of 1:43.79 set at 2012 Barcelona.

"I was so much under pressure but I am happy to win at home," said Wanyonyi, who dedicated the victory to his mother Margaret Nasimiyu from Saboti, Trans Nzoia. " I had to work extra hard after being spiked in the second lap.

Nijel’s victory was the last time by an athlete from another country as Kenya took dominance to win the next four editions including Wanyonyi’s exploits.