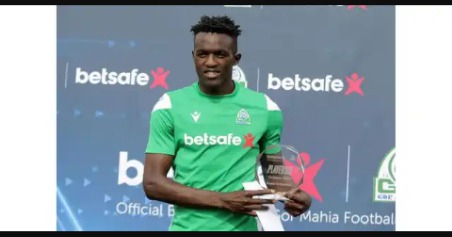 Gor Mahia defender Frank Odhiambo poses with trophy after he won the club's Betsafe player of the month for October on November 24, 2021.

Harambee Stars captain Michael Olunga played for the club during 2016/17 season, scoring 12 goals and it's believed his success largely contributed to Odhiambo securing the deal

Frank Odhiambo says joining Swedish giants IF Djurgadens is a dream come true and is looking forward to winning titles with his new team.

"We followed Frank in the Kenyan league with Gor Mahia where he achieved great success and became Player of the Month and also when he played internationally in the African Champions League. He has had a strong development spiced with national team games in and so we started a discussion,” said the clubs director Bosse Anderson.

"Playing professional football abroad is the dream of every player and I thank God for getting this chance. It will help me grow in my career as I intend to achieve more with my new club including winning titles," said Odhiambo.

"Another big reason why I chose Djurgården is I want to follow in Olunga's footsteps and develop into an even better player in that environment. Djurgården is a good team for young players who want to get the best out of their careers and are good at guiding players in their development," added the youthful defender.

"My Mhesh Boyfriend Used to Beat Me and I Thought it Was Love, He Dated My Aunt" Lady Narrates