By SureFootballTales (self media writer) | 18 days ago 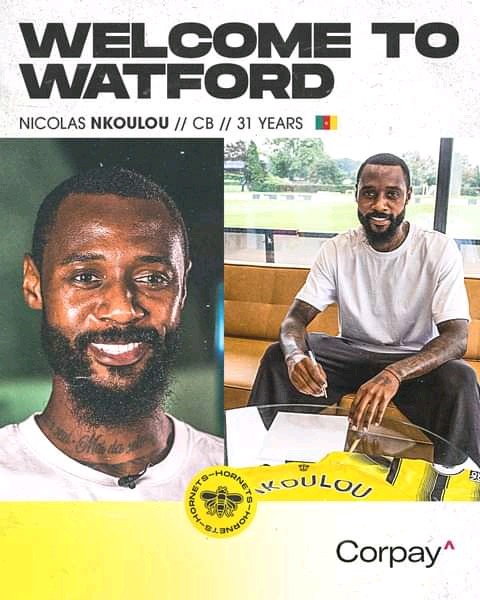 Nicolas Nkoulou has finally his contract until June 2023 as new Watford player after agreeing to join the Hornets on as a free agent according to Fabrizio Romano. Watford have officially announced the signing of Cameroonian defender Nicolas Nkoulou, who is likely to make his Premier League debut next weekend. The 31 years old successfully completed his medicals at Vicarage Road as a Free agent and is set to help Watford stay in the Premier League given his vast experience in defence. 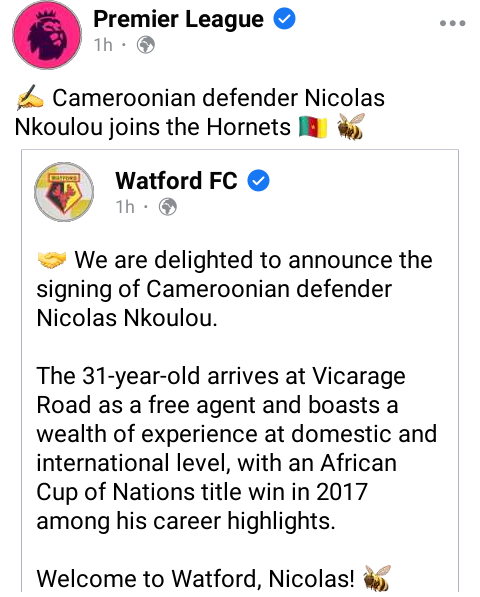 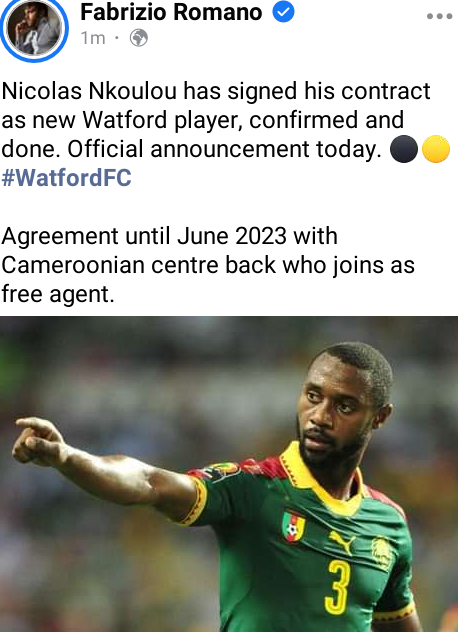 Former Tottenham Hotspurs right back Serge Aurier has left Premier League to join La Liga giants Villareal as free agent on a one year contract with an option to extend until June 2024 according to Fabrizio Romano. Aurier successfully completed medicals at Madrid before officially being announced as a new yellow submarines player hence likely to make his debut next weekend. 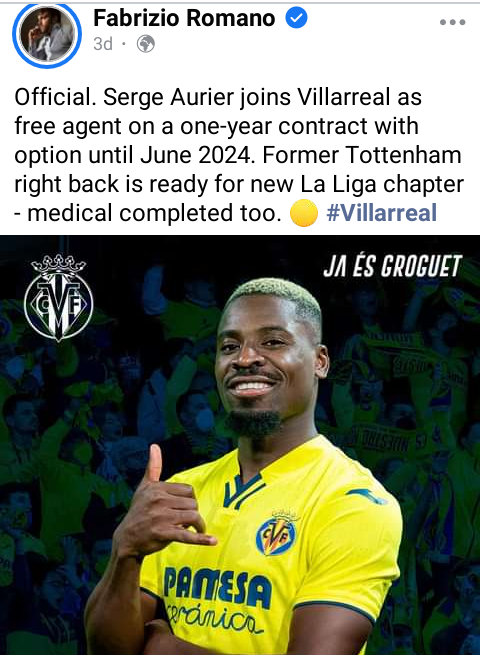 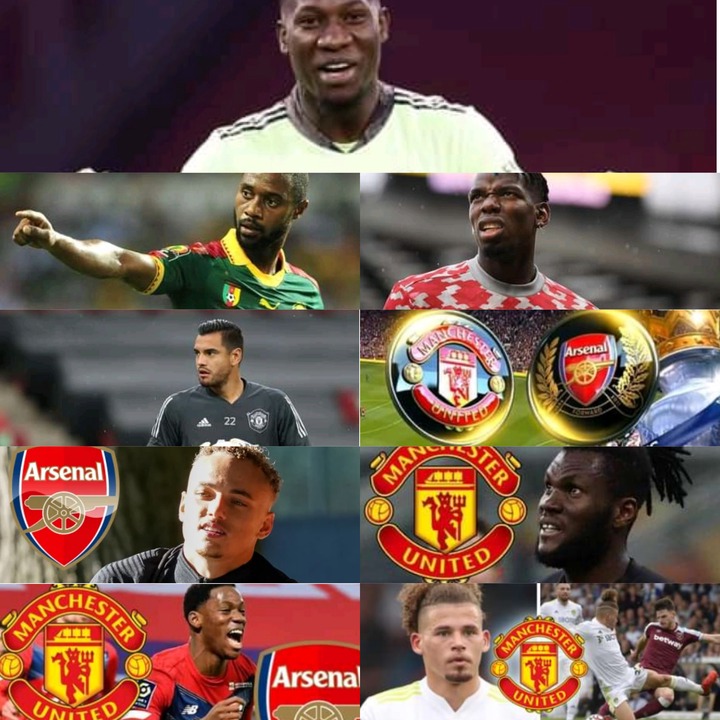 Manchester United and French midfielder Paul Pogba is reportedly open to extend his contract at Old Trafford and is set to earn £400K a week if he signs the new contract at the table. Pogba has a contract proposal on the table from Man United which is a new longterm deal with increased salary but is yet to respond back according to Fabrizio Romano. Manchester United remain intrested in Leeds United Captain Kalvin Phillips and Ac Milan midfielder Franck Kessie even if Pogba decides to stay at Old Trafford. 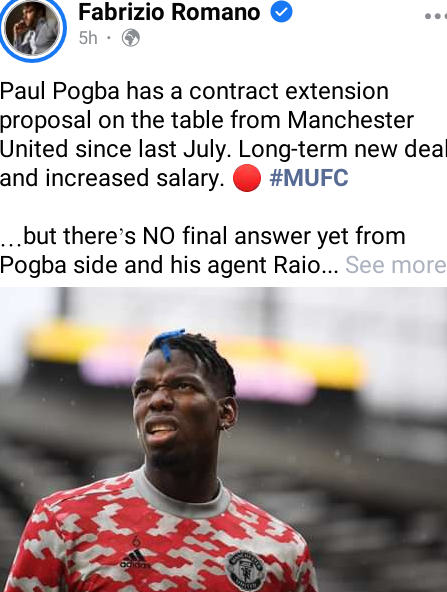 Inter Milan have reached a verbal agreement with Ajax Goalkeeper Andre Onana and is ready to join the Nerrazurris as free agent in Summer 2022 according to Fabrizio Romano. The contract negotiations are at final stages but not signed yet as Inter Milan prefer Onana over Arsenal Goalkeeper Bernd Leno. The Gunners have turned their transfer attention to Noa Lang of Club Brugge and Jonathan David of Lille. 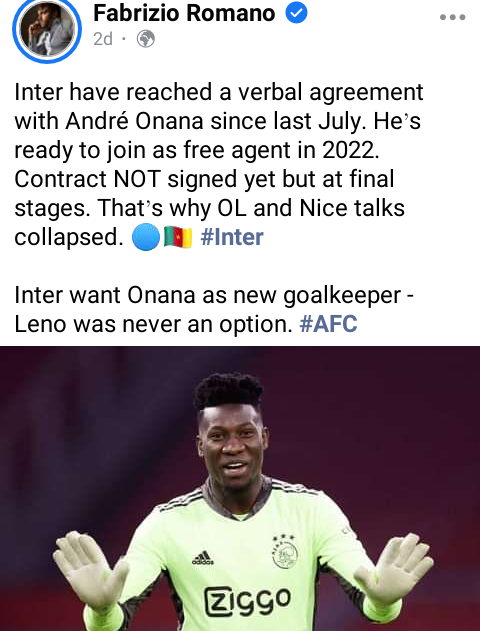 Former Mancester United shots Stopper Sergio Romero is set to join Serie A side Venezia as a free agent after permanently being released from Old Trafford. Negotiations are at final stages after Venezia beat Spezia to land the Argentina Goalkeeper according to Fabrizio Romano. 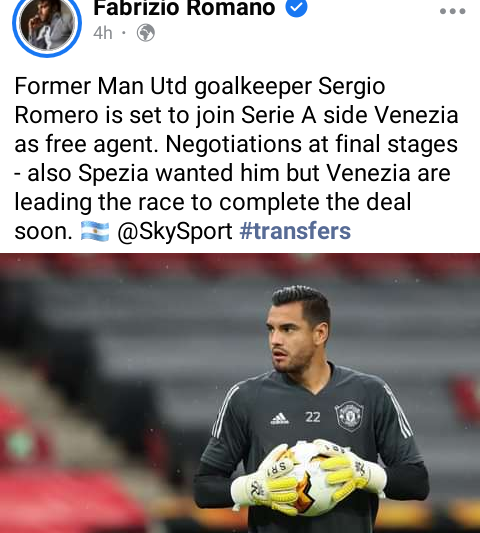