By Clarence (self meida writer) | 1 months 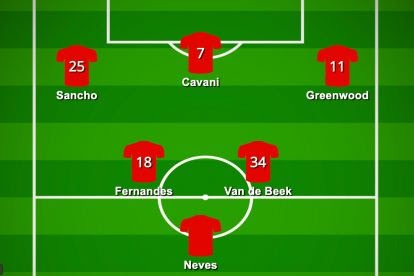 Manchester united will welcome Leeds at Old Trafford ahead of opening of the new season in their first match. Manchester United could give Jadon Sancho and Verane their debuts in their opening matches against Leeds. It is two weeks now since Jadon sancho moved from Borussia Dortmund to Manchester United, further agreement to sign Real Madrid’s defender Raphael Verane has also been announced although completion of the transfer is a subject to a medical. Manchester United have also be

en linked to sign Neves from Wolverhampton who is likely to leave the club after finishing a four-year contract with the club. David de Gea still remains the club’s favourite to start opening match against Leeds.

In the defense team, Aaron Wan Bissaka, Harry Maguire and Luke Shaw are likely to feature in the backline. Raphael Verane from real Madrid could be involved in the Manchester United squad in case the transfer from Real Madrid is completed successfully on time. Ole Gunnar is said to be keen on changing the system up at Manchester united in the upcoming season. The Manager is more likely to come up with a more attacking midfield after signing a defensive midfielder, Raphael Verane. This could be better than two defensive midfielders Fred and Scott McTominay.

Marcus Rashford is likely to be out for the first three matches of the season with a shoulder injury. Jadon sancho is expected to fill his gap on the left wing for the first opening game. Edinson Cavani is likely to start as a lone Stricker with Mason Greenwood on his right side. Manchester could still maintain to use 4-3-3 formation with: De Gea, Wan-Bissaka, Verane, Maguire, Shaw, Neves, Van de Beek, Fernandes, Greenwood, sancho and Cavani.

The biggest match that might determine Manchester United's position on the EPL table. (Opinion)