England giants Arsenal football club has rejected an offer from Aston Villa football club to sign their youngest superstar Emile Smith Rowe.His efforts during the 2020/21 season impressed Mikel Arteta and made 37 appearances thus becoming a key player in the club. 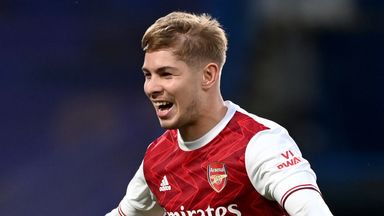 The England giants have announced that they do not intend to sale the youngstar and the club remain hopeful that he will extend his contract as his current deal ends 2023.

Emile Smith Rowe is one of the Arsenal academy products who scored seven goals and making seven assists in thirty seven appearences he featured during the 2020/21 season.

The Arsenal forward was before offered on a loan at Huddersfield and later on joined bundesliga giants RB Leipzig before he made his come back return to emirates stadium.

His efforts has helped Arsenal to an eighth place finsh in the premier league this season that has just ended.

Jubilations At The Bridge After Chelsea Are Set To Secure World Class Players. Striker And Defender.